A seemingly friendly farmer and his sister kidnap unsuspecting travelers and bury them alive, using them to create the "special meat" they are famous for. 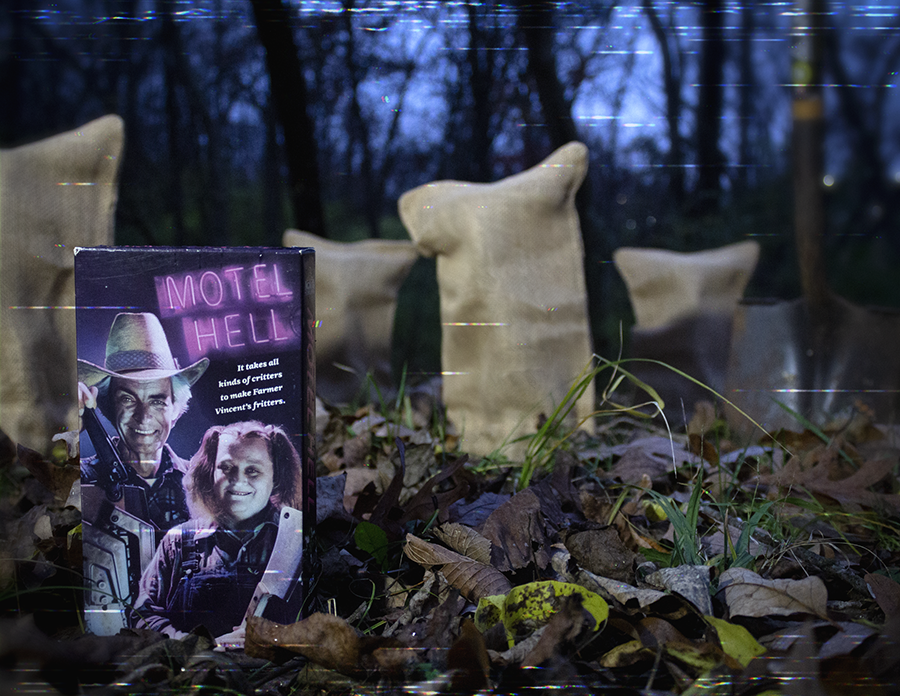 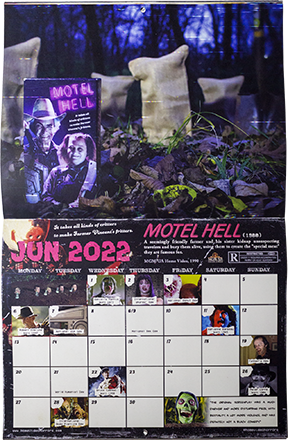 This was another movie I was especially excited about when the calendar was first released. My aunt actually got me this tape for my birthday last year so it couldn’t have been more perfect. Movies like Motel Hell and My Bloody Valentine were actually unnatural formative parts of my aunt and dad’s childhood. While they were little, anywhere from the age of eight to thirteen, their parents would take them to scary movies while they were still in theaters. This was the late 70s to early 80s, so they saw a lot of the good stuff. Tobe Hooper’s The Funhouse, My Bloody Valentine, Friday the 13th, and so much more kept them up at night. Ratings meant nothing to their mom; she would just bring them into these movies. Motel Hell was one of these movies and ever since my dad told me it was one of the craziest movies he’s seen, I’ve been into it.

Human sausage has been a staple in twentieth-century folklore. There is the Scary Story to Tell in The Dark of Wonderful Sausage, which in turn is based on an old song, Johnny Rebek’s Sausage Machine. The song is more lighthearted while the story is a horror twist on it. Even Sweeny Todd plays on cooking human meat and serving it to people. Motel Hell is its own tale of human sausage that can only be described as a hybrid of Psycho and Texas Chainsaw Massacre, especially with the setting and characters. In fact, the movie is said to be a parody or satire on movies such as this. Personally, I feel it’s no Dead Alive when it comes to horror-comedy, so Motel Hell can be watched with some seriousness. You have a modest budget of $3 million, some underrated classical Hollywood actors, and a three-star rating from Roger Ebert –let’s get to the meat (pun intended) of Motel Hell. 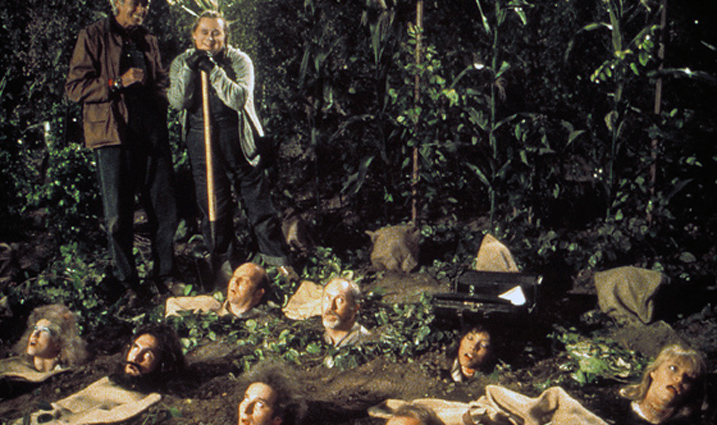 Terry (Nina Axelrod) and Bo’s (Everett Creach) motorcycle outing takes a Misery-style turn when they run a road trap set by local farmer and motel owner Vincent (Rory Calhoun). Vincent and his sister Ida (Nancy Parsons) have been doing this for years to make their famous smoked meats with their motel, the Motel Hello, as a front to gather people plump enough to make good sausage meat. Since they are often passersby, it’s easy to shrug off all the missing person reports. The most ironic part of it all is that Vincent and Ida’s little brother Bruce (Paul Linke) is the Sheriff and he has no clue about any of this. Everyone knows how it takes all kinds of critters to make Farmer Vincent’s fritters –he cuts their vocal cords, buries them in a secret garden up to their head, and harvests them when they are “ready.” Bo is put in the garden, but Vincent brings Terry back to the motel.

A large portion of the movie is Terry’s interactions with the Smith siblings. Vincent and Bruce immediately begin vying for Terry’s affection right after telling her Bo “died.” You’d think she’d lean more heavily towards Bruce with him being the hero and all (there was even dramatic fanfare when he was introduced getting out of his cop car like an action hero and then not looking like one). But Terry leans towards the older Vincent. Rory Calhoun wasn’t that old when they were making that movie, but they make him look at least ten years older. I can’t tell if Ida gets jealous of Terry moving in because she seems to have some infatuation with her brother. It’s bizarre and not touched on at all. I don’t know, maybe she just craves a return to the normalcy of slaughtering people for meat. Meanwhile, Vincent continues round up people with his road traps –the fake cows were neat. We get treated to his and Ida’s process of inducing euphoria by hypnosis to humanely and painlessly snap the necks of those they are harvesting. They treat it like working in a slaughterhouse, business as usual.

The movie comes to its natural conclusion when Terry finds out where the meats are coming from. At the same time, Bo and the others with sliced vocal cords in the garden escape in what is a very good tribute to zombie movies with the cinematography. They swarm Ida and bury her in the garden before Bo goes after Vincent about to meat process Terry. They’re all making the most unpleasant scratching squealing sound since they can’t speak. After Vincent strangles Bo, it’s Bruce to the rescue in the climax that the movie is known for. Vincent dons the pig head as a mask and a chainsaw and goes after his brother. Rather than run, Bruce arms himself with another chainsaw and they have a spark-filled duel on metal-on-metal with Vincent laughing the whole time. This was years before Texas Chainsaw Massacre 2, so the chainsaw fight was never seen before. Bruce sadly puts his brother down and escapes with Terry. As they leave, the “O” in the Motel Hello sign blows out and the film title greets us as it ends in a great shot. 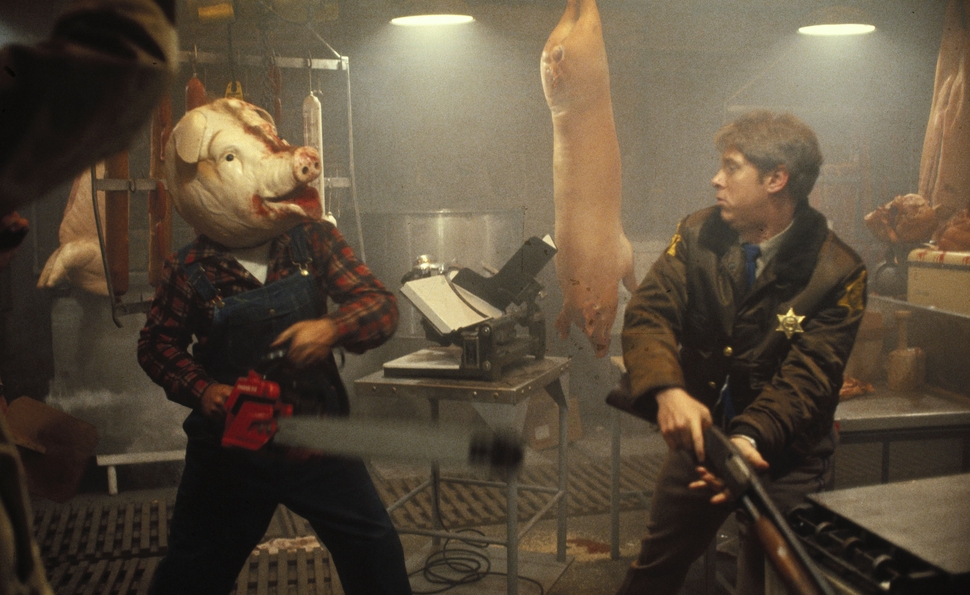 Firstly, I need to address this movie’s treatment as a black comedy. I never understood it because there are no laugh and chuckle-out loud moments or lines like Dead Alive. Maybe it’s supposed to be cringe comedy or anti-humor because I do get Tim and Eric vibes from some scenes. I was kind of expecting a biting satire or at least a jab at the meat industry and how we are what we eat (I’d even take a vegetarian message), but there are none of the sorts. All the lines supposedly meant to be funny are delivered so dryly, so it must be anti-humor. I can see how Motel Hell was perhaps a more dark and evil-natured movie before getting the light horror comedy treatment. I absolutely see where that bestiality scene would’ve come in –when those two swingers check into the motel. Rather than a parody of slasher movies before the 80s, Motel Hell feels more like a homage or tribute.

I don’t think Motel Hell is that low budget with its cost of $3 million to make. It had a couple of entertainment icons from the 50s and 60s with Rory Calhoun and Wolfman Jack as the Reverend who agrees to marry Terry and Vincent in one scene. The filming location of the Sable Ranch in Santa Clarita has been a set for film and tv since the 20s. The film’s score by Lance Rubin wasn’t recorded in a small-time studio, it was at Warner Brother’s. Directing was done by British Kevin Connor, who has a track record of epic science fiction and fantasy films during the 70s. How wild is that? He went from shooting prehistoric landscapes with dinosaurs and the lost city of Atlantis to a rural motel in the middle of nowhere. The shocking part is that Motel Hell has a larger budget than those movies. 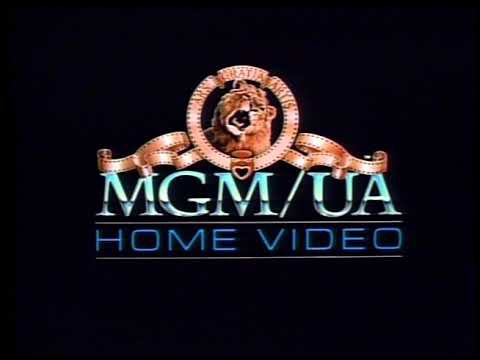 All there’s left to say is that Motel Hell is actually not that much of a gore-fest as you would think. It’s actually pretty tame when it comes down to it. Still, I can see how a movie like this would stick in my young dad’s head when he first saw it. Swinging chainsaws are scary –why do we still run from those amusement park scare actors even though we know their chainsaws have no cutting band? The whirring machine, the swinging –it’s all very unpleasant. Seeing it actually cut into something is another thing entirely.

Motel Hell wasn’t much of a bomb at the box office. It did bring in a profit of its budget when it grossed $6 million. It was also one of the last films to be distributed and released by United Artists (UA) before it was acquired by Metro-Golden-Mayer (MGM). That brings us to the VHS release which is an MGM/UA Home Video release. Despite the big name of MGM of the box, there are no coming soon trailers or teasers. Motel Hell today remains remembered for Vincent in the pig mask –that iconography keeps the HD rereleases coming. Maybe one day the dark original tale of Motel Hell can be revisited. Or maybe it's best for this turn-of-the-decade cult classic to be enjoyed for what it is, like every movie on the calendar.