A folk tale surrounding a deranged murderer killing those who celebrate Valentine's Day turns out to be true when a group defies the killer and people start turning up dead. 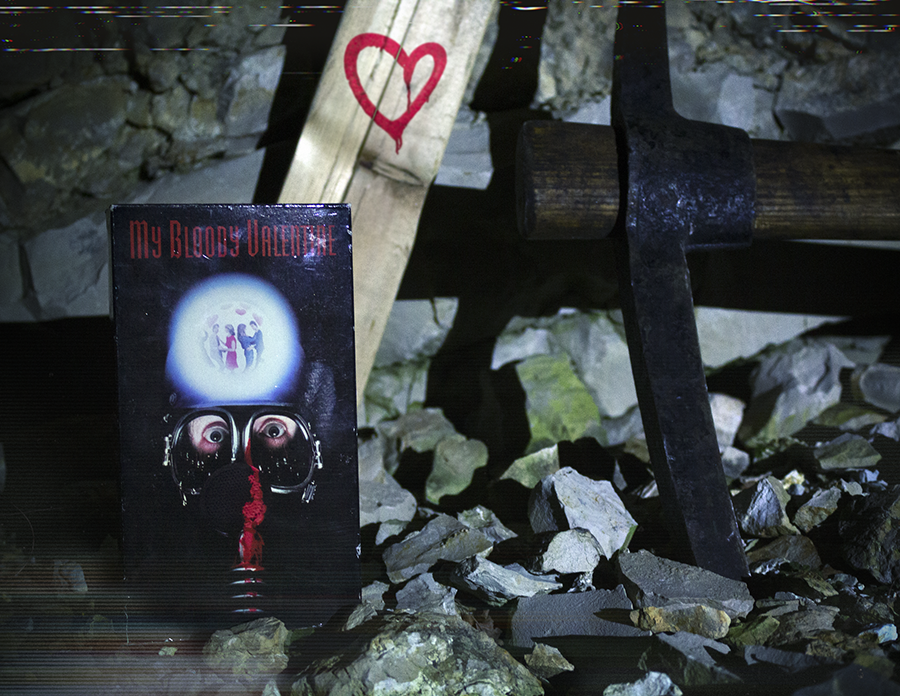 My Bloody Valentine: VHS of the Month Review 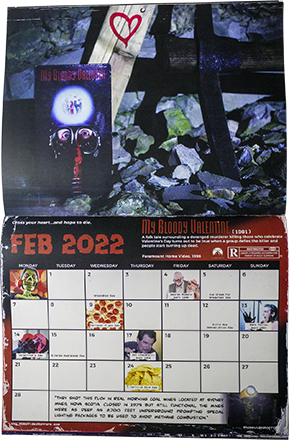 Something watching these movies has shown me is that Canada had a hand in creating the slasher genre. In fact, you can say it played a major role with filming locations, crews, and small production companies. And, if you look back, some of the earliest slasher films were holiday or special occasion-related and made in Canada. Black Christmas (1974), Prom Night (1980), and Terror Train (1980) are some of the prime examples. Of course, we also have My Bloody Valentine -the go-to scary movie for Valentine’s Day. With five years of making calendars and photo art, it had to take a certain amount of self-control for Jacky and Rotty to use this one. I commend you for that. Now the time has come where we can finally sing The Ballad of Harry Warden with Valentine’s Day’s boogeyman.

Like how all slasher tales begin, My Bloody Valentine begins with a tragedy. You perhaps know the story as well as Michael Myers’ Halloween origin. Mining supervisors in the maritime province town of Valentine Bluffs leave the mine for the 1961 Valentine’s Day dance, but miners are left behind. The methane levels go unchecked and there is a cave-in. One miner, Harry Warden (Peter Cowper), lived by eating his coworkers until he was found. While he was sent to an asylum, the supervisors were let off. But they weren’t for long until Harry got out his old mining gear and killed them. His calling card was their hearts in candy boxes with a sing-song warning to not have the Valentine’s Day dance again. From there the story gets hazy with Harry either being caught and sent back to the asylum or remaining on the run. Valentine Bluffs did just that until one faithful February in 1981.

We got a big group of youth here with T.J. (Paul Kelman), Sarah (Lori Hallier), Axel (Neil Affleck), Dave (Carl Marotte), Sylvia (Helene Udy), Patty (Cynthia Dale), Howard (Alf Humphreys), Mike (Thomas Kovacs), Harriet (Terry Waterland), and John (Rob Stein). I know it’s a mouthful but truthfully all you really need to know is T.J., Sarah, and Axel. Everyone else kind of blends into one character. They’re always grouped up and when someone is alone you always think it’s someone else. Again, T.J., Sarah, and Axel are the big three of this movie. T.J. is the mayor’s (Larry Reynolds) son and he and Axel both have a thing for Sarah but she hasn’t made up her mind. I think she was leaning towards T.J. but it’s kind of a reverse Betty and Veronica situation. They’re all hyped for the dance happening again, but that is dashed when a dance volunteer Mabel (Patricia Hamilton) is killed in a laundromat with her heart in a candy box. Police Chief Jake Newby (Don Francks) struggles to keep up with the case as the teenagers plan a Valentine’s Day dance of their own at the mine. Which as we all know will only end in carnage because pickaxe kills are messy. 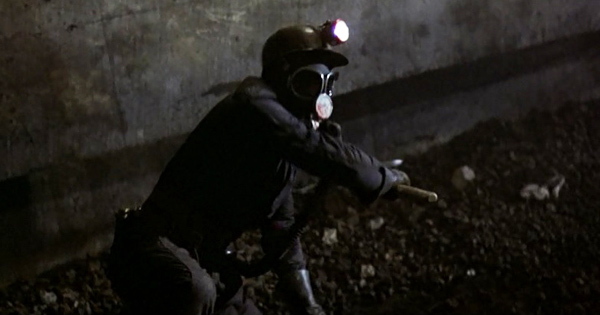 If you’re antsy about spoilers then you’ve reached the appropriate reading point. I don’t think the entire story of My Bloody Valentine is as common knowledge as Sleepaway Camp is -but I could be wrong. I mean, there’s a band named after it. My Bloody Valentine starts out like Halloween where the killer is on everyone’s mind and his identity is known -almost synonymous with the town. As the bodies pile up and more discrepancies like Harry Warden’s lack of a record at the asylum come to light as Chief Newby unravels the mystery. It ends as a whodunit story like Prom Night with Harry Warden having died several years ago and Axel being the killer. He was a part of the original tragedy when 20 years ago Harry Warden killed his dad who was one of the mine supervisors. There really was no indication of this throughout the movie of any sketchy behavior on Axel’s part. In fact, Neil Affleck wasn’t the one in the mining suit. None of the actors were told who the identity of the killer was until they shot that final scene. That means that Peter Cowper was the one in the suit. Affleck wasn’t aware that was his character at all. So maybe they weren’t trying to drop subtle hints and it was probably meant to be a twist ending. It’s jarring but that has been the accepted end of My Bloody Valentine as it was included in the 2009 remake.

They say that My Bloody Valentine is low budget, but I don’t think $2.3 million qualifies as that. It’s definitely not the lowest budget of a movie we’ve looked at. Despite this, the cast was largely made out of people just starting their acting careers or had a screen presence in Canadian film and T.V. This was only director George Mihalka’s second film and already he was producing it for American release by Paramount. That’s not straight to video, it’s the big league. It was also John Bearid’s first screenplay before he wrote Happy Birthday to Me the next year. Paul Kelman and Neil Affleck were young actors and also friends who had gotten the jobs together, and Lori Hallier was a student at the National Theatre School of Canada. She had to get an A on her final. Speaking of Canadian media, I have to point out Marguerite McNeil in a really minor role as the resident Mrs. Raleigh. The Trailer Park Boys fan in me has to give her a mention. She passed away last year; watch all her scenes in Trailer Park Boys since season eight, she’s hilarious in it. My Bloody Valentine is only my second favorite thing taking place in Nova Scotia. 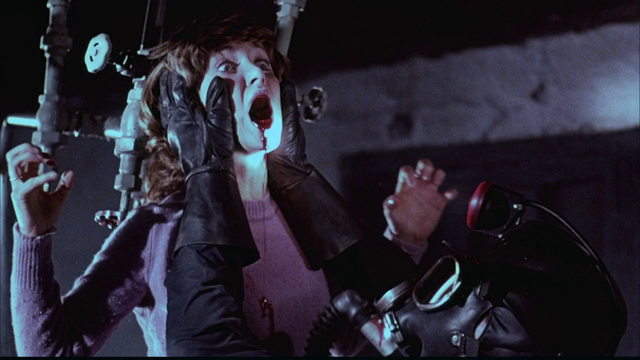 Let’s talk about Neil Affleck really briefly because I did a little digging on him. I was curious to see if he was related to Ben Affleck. He is not, but he is someone better. Tired of the spotlight, Affleck moved to L.A. to become an animator. People like him helped create the childhood of a 90s kid like me as he animated for Rocko’s Modern Life and The Simpsons. He animated The Simpsons from 1997 to 2007, so he was working in the Silver Age of the show. He also worked for the competition with The Critic and Family Guy. In fact, his visa was about to expire when he was hired for The Simpsons. When word got to them that he was animating for America’s #1 animated family on prime time, it was extended immediately. Here’s to you Neil, you legend.

Now it’s time for the damage report, boys and girls! Where we look at how badly a movie was censored at the time of its release. For My Bloody Valentine, we have a damage report of nine cut minutes. Nine minutes -you can make three Hot Pockets in that time. The best cut shots had to be the dried-out corpse of Mabel spinning in the laundry machine and the pickaxe going beautifully through the face of the bartender trying to scare the youths from the mine. His eye is popped out and resting on the tip of the pickaxe as it goes up through his chin and out his head like a fish hook. Our course when Axel amputates his hand at the end to escape authorities is cut, so it’s not entirely clear how he gets out unless you see the stump with the ripped clothing and put two and two together. We’re also missing scenes of actual heart-ripping which is pretty much the main motif of the film. It’s good that we live in a time where unrated and uncut versions are so readily available, but sometimes I can’t help but weep for people who couldn’t at their time. 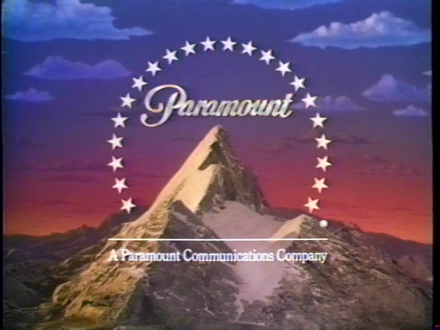 Paramount Pictures wanted to make money with My Bloody Valentine and they were really cool by giving it a February release date the same week as Valentine’s Day. 1975 to 1983 (or 1984 if you want to be generous) was the Golden Age of slasher movies with masked killers coming out left and right. Harry Warden was able to stand out as one of the major slasher icons with My Bloody Valentine grossing $5.7 million. Paramount wasn’t too happy with it though. They had made much more money with Friday the 13th the year before, and that budget was even lower. But everyone involved in production gave themselves a pat on the back.

Paramount Home Video naturally handled the home video release. I was surprised. I thought a movie company as big as Paramount (which needs no introduction as one of the Big Five film studios of Hollywood) would have previews for their movies on their tapes. But the tape just cuts to the movie right after the FBI warning. Today, My Bloody Valentine enjoys the legacy that all horror movies that left their mark in the Golden Age did -a 2000s remake and appearances at Universal Studio Halloween Horror Nights. I got chased by a Harry Warden at Orlando’s 2009 one. I know the Rabbi at my Bar Mitzvah that year said I was a man, but I sure didn’t scream like one, let me tell you.