A young man's mother is bitten by a Sumatran rat-monkey. She gets sick and dies, at which time she comes back to life, killing and eating dogs, nurses, friends, and neighbors. 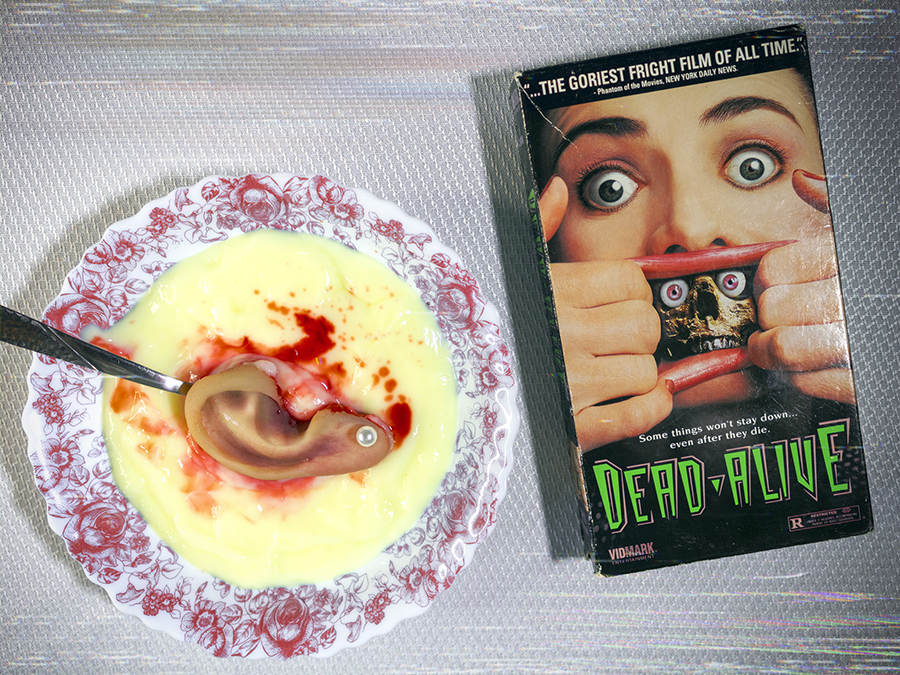 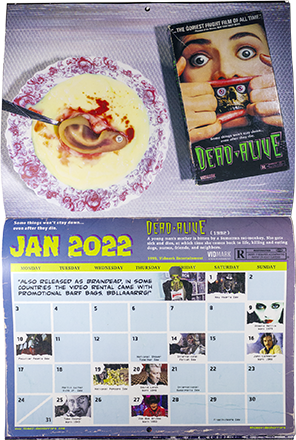 A new year around here means a new selection of tapes and that is something I’m all too happy to be a part of. Rotty Rentals put together another selection of B-horror movies that we may have seen before, remembering from our time going up and down the aisles of the video store, and even some movies we’ve never heard of before on rare home releases. We got another diverse section this month and in the spirit of January, Home Video Horrors always comes out of the gates with a gory zombie flick. This time last year we did Re-Animator, now we’re doing 1992’s Dead Alive.

Peter Jackson is like a Pokemon in the regard that his filmmaking seems to have gone through a couple of evolutions, especially when he was first starting out in the 80s. We know him today as a big-shot Hollywood director who specializes in epic storytelling and production. Lord of The Rings, The Hobbit, and 2005’s King Kong boast immersive special effects, long runtimes, all-star casts, and worlds that seem to pop with lands like The Shire and Skull Island. But it wasn’t always like this for the New Zealand director. He got his start shooting backyard productions in his hometown of Wellington through his own production company, WingNut Films. I like to think of them as a New Zealand Troma. Their films were shorter, more simple, and you can bet the budgets were low. Some of Jackson’s friends just worked for him for free. During this time from 1987 to 1992, Jackson released a sort of trilogy of splatter-stick films – Bad Taste, Meet The Feebles, and Braindead (or as we know it as Dead Alive). Bad Taste is an alien invasion story, Meet The Feebles is a dark Muppets parody, and Dead Alive is a zombie film that was long in the works at WingNut. Nothing like international cinema, am I right? 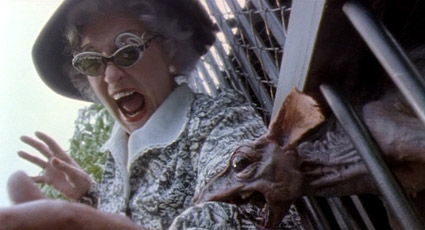 You can argue that Dead Alive takes place in the same universe as King Kong because our story begins on Skull Island. A New Zealand expedition team captures the creature known as a Sumatran rat-monkey. This creature is an eldritch horror itself. Apparently, they came about from interbreeding between plague rats and monkeys. This vermin primate hybrid packs a bite that turns anyone into a decaying, organ-consuming zombie. Is it science gone awry or black magic? That’s all up for interpretation. Our setting is the Wellington countryside where the rat monkey has since been sent to the zoo and we learn what our story is all about. Lionel (Timothy Balme) lives with his overbearing mother Vera (Elizabeth Moody). They have it pretty good living in a mansion and all. Lionel’s a loveable goof who can’t live his own life because of his mom and being haunted by the death of his father. That is until he meets a Spanish shopkeeper’s daughter, Paquita (Diana Peñalver). Her grandmother (Davina Whitehouse) is a fortune teller and sees death surrounding Lionel in the future and a dark presence, but nonetheless a hero in Lionel. A lot of Jackson’s early films are often love at first sight stories. Lionel’s mom is not too pleased and follows them on a date to the Wellington Zoo. Where the rat-monkey is being a horrifying stop-motion ghoul ripping off a real monkey’s arm. Well, that’s just one of many things getting ripped off in this movie.

Vera gets bit when she gets too close to the cage and kills the damn thing, but the disease has already taken hold. From there, it’s all Lionel on damage control as his mother dies and comes back as a zombie. It’s while he’s doing all this we’re introduced to the town and characters around him. There’s the Mathesons (Glenis Levestam and Lewis Rowe) who come over for lunch while Vera decays and pretty much dies at the table. She actually eats the ear you see in the picture up there. Nurse McTavish (Brenda Kendall) is the first to be killed by zombie Vera and a visually appealing zombie with how her nearly detached head hangs over her back. Watching Lionel feed her is humorously disgusting. There’s Lionel’s Uncle Les (Ian Watkin) who arrives to collect the inheritance when word gets out that Vera died -he’s a goddamned tank that looks like Brian Dennehy. No one can forget Father McGruder (Stuart Devenie) who kicks ass for the lord. But this will prove to be futile against the newly infected Void (Jed Brophy) and his gang in the cemetery when Vera returns from the grave. The baby zombie is a mouthful to deal with. Don’t worry, no baby actually gets bit, zombies just bump their decaying uglies. A zombie giving birth seems like an oxymoron, but it could be magic. Lionel keeps them on tranquilizers in the basement, but every time he secures the premise, the goal line just moves and crap always hits the fan. At the same time, it’s putting a strain on his new relationship with Paquita. We knew his mom depended on him, but this is ridiculous. The culmination of all this is a final showdown in a house party thrown by Uncle Les, which has every kill imaginable. Every single one is a Mortal Kombat fatality with great practical effects and gallons on gallons of fake blood, literally. It’s the most intense way that Lionel can say he won’t take his mother’s crap anymore. 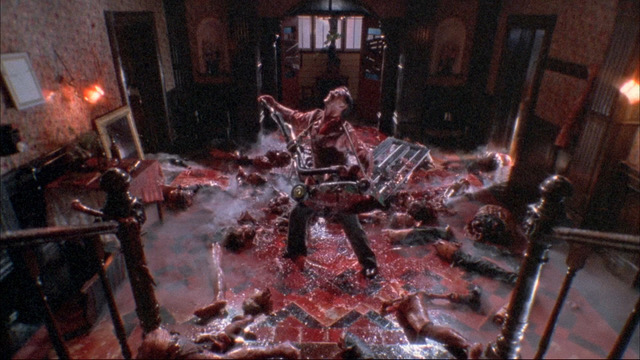 As an original WingNut production, Dead Alive was shot entirely in or near Wellington. Some of their filming locations are actually pretty beautiful. They never left town to film the Skull Island scene, it was all done at the Putangirua Pinnacles, which is one of New Zealand’s most famous geological sites. Jackson would return here to shoot scenes for Return of The King. New Zealand can be Skull Island or Middle Earth -that’s just how magical it is. The actual Wellington Zoo was also shot at along with a real cemetery. In fact, it was too real. WingNut Productions was actually sued by the family of someone whose headstone they had fully filmed. Basically, they doxed a dead dude.

But I know what behind-the-scenes part you want to read all about. It’s the gore and effects because that’s honestly how you came to know Dead Alive or Braindead. Unlike Bad Taste, Jackson had far more of a budget to work with of $3 million. Critics enjoyed that and Meet The Feebles, so people were interested in how Jackson’s zombie movie would turn out. The stars of the gore show are Bob McCarron and Richard Taylor. Taylor would go on to help Jackson with the special effects for Lord of The Rings and King Kong which he would get Oscars for. Jackson also made miniature models, another staple of his filmmaking. If you go to Universal Studios, you can see the ship model from King Kong. They had a field day with the gore and kills in Dead Alive, combining splatter and slapstick. I wonder if you can count Mortal Kombat as a splatter-stick in that regard. Classic zombie fans and Romero purists can always get a kick out of Lionel vs. the living dead. I think the people that will rejoice the most are Evil Dead fans too. That chop shop stun Lionel was running with the lawnmower used nearly 80 gallons of fake blood. The floor really looked like you would slip if you walked on it covered in all that blood. It conveys the texture of everything being drenched better than most gory movies do. Those promotional barf bags went a long way.

Dead Alive’s original title is Braindead. Us Yankees gave it that name as it was released to us one year later in 1993. In 1990, there was a movie called Brain Dead with Bill Pullman and Bill Paxton. On its $3 million budget, it flopped. It flopped hard at $242,623. At least now, many people believe it wears the crown as the goriest movie out there. Is it really? I’m not going to check. I saw Evil Ed. I know what happens when you watch too many gory movies. 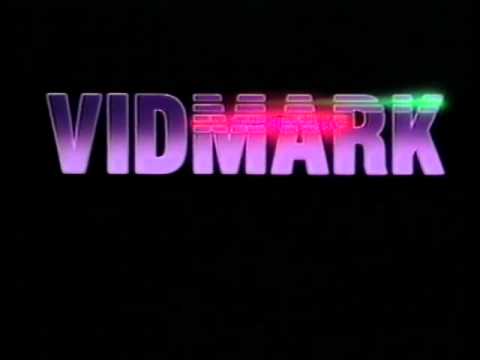 So with all that gore, let’s look at what governments aren’t tolerant of it. Did you know the uncut version is entirely banned in Germany? They tried releasing their own version, but shaving off all those graphic scenes severely reduced its runtime. South Korea and Singapore are other examples where public showing of Dead Alive is illegal. Amazingly, the UK was actually really cool about it. They found that their gore was so over the top and comical, that they could’ve even given it a lower rating. That’s what many horror filmmakers try to do with their gory movies. Adam Green said that’s what he was trying to do with Hatchet II, but the censors were less kind to him. Remember that Toxic Zombies was banned entirely in the UK and it didn’t nearly have as much gore as Dead Alive?

I remember seeing this tape all the time in the Blockbuster horror section. This box art of the skull in the woman’s mouth -pure gold. Small me used to stand around and look at it for minutes at a time, wondering what this movie was about. I thought it was a story about a skeleton living in someone at one point. This home video release is brought to us by Vidmark Entertainment. In fact, it was them who decided to run Dead Alive through American theaters. They knew Peter Jackson was an up-and-coming filmmaker. Vidmark is one of the youngest home video production companies and distributors we’ll be looking at with its founding in 1984. They began making video store appearances in 1987. In 1989, it would go by Trimark Pictures after their production company. This tape still goes under the original Vidmark name despite the 1993 release. This tape includes trailers for some of Vidmark’s 1993 releases like Warlock Armageddon, Cyborg 2, The Tommyknockers, and Brainsmasher: A Love Story. There’s also a Jolly Rancher ad somewhere in there too. In 2001, Trimark Pictures would go defunct and merge with Lionsgate, becoming what we know today as Lionsgate films. We’ll be seeing a lot of Lionsgates’ releases this year. For a full history of Lionsgate, check out the May review.

Here’s to 2022. We got some interesting pics ahead of us.