Eggs of the small but voracious alien creatures called Crites are left behind on Earth. After hatching, they set their appetites on the small farm town of Grover's Bend. 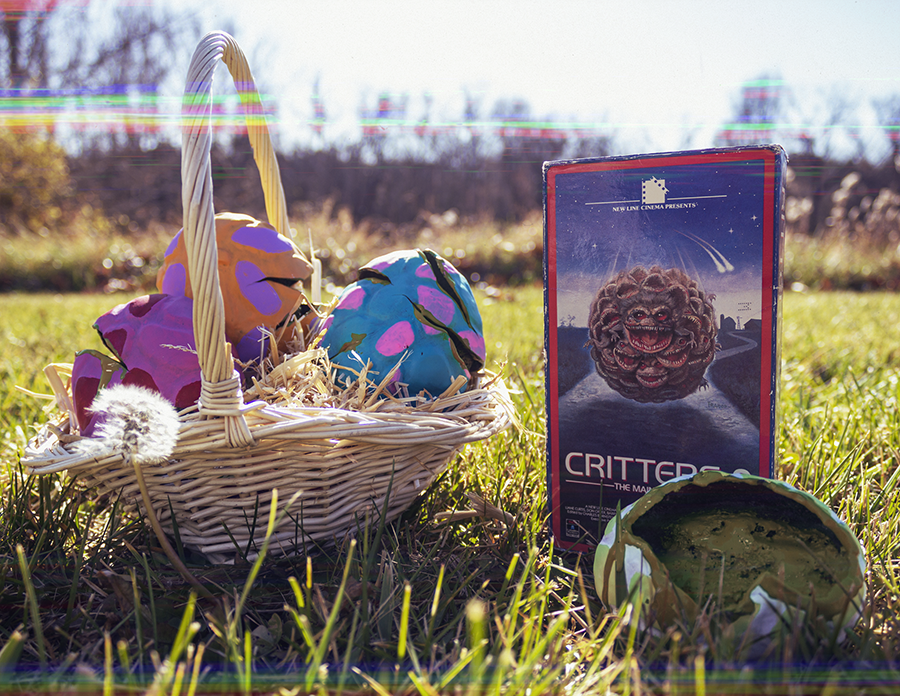 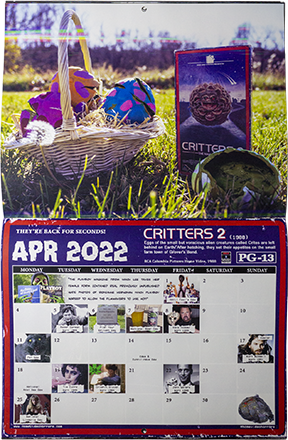 Oh yeah! It's Scotty G! As someone who loves and uses American Dad as background noise during work and play, I was really excited to see a whole movie with the voice of Steve Smith. And, it's one of the best kinds of a movie –an 80s B-movie sequel. Critters is widely believed to be a Gremlins rip-off, but the director and writer of the first movie had been workshopping it beforehand. If anything Critters has influences such as a Roger Corman 50s aliens attack film. Small, furry creatures are the funniest things that an invading alien species can be –especially when they are feared and pursued throughout space by other alien authorities. The first Critters grossed over $10 million and even got praise from Siskel and Ebert. Clearly, they enjoyed the subversion.

A second one just had to be made to see if the Krites, as they are actually called, had franchise potential. Newcomers to the series don't even have to start with the first one as they can easily infer what the sequel entails. I haven't seen the first Critters, but you don't need to be a cinematic expert to assume that the ending involved a foreshadow that they weren't fully beaten and would be returning. There had to be a surviving Krite jumping out at the camera before it cut to the credits or leftover eggs being revealed. This was confirmed right when Critters II: The Main Course started.

Krites are galactic vermin that have made their way to Earth with the bounty hunters from space that are chasing them. They're no small potatoes in the threat level sense; even galactic counsels want them exterminated. Critters II takes place a year after the first victory over the Critters by residents in the small town of Grover's Bend. We have two returning heroes with Brad (Scott Grimes), Charlie (Don Keith Opper), and Ug (Terrance Mann). Brad is a local, Charlie was the town drunk-turned-alien bounty hunter, and Ug is shapeshifting alien tasked with killing Critters from the start. Since the events of the first film, Charlie has joined Ug in space. He has a really nice arc about finding meaning in life when he couldn't as a nobody on Earth. A call from the Galactic Council sends them back to Earth when Krite activity is detected. They're joined by a third shapeshifting alien, Lee, who later takes on the form of Roxanne Kernohan (herself). The whole movie is their battle with the batch of Critters during the town's Easter celebration –there's our monthly theming. 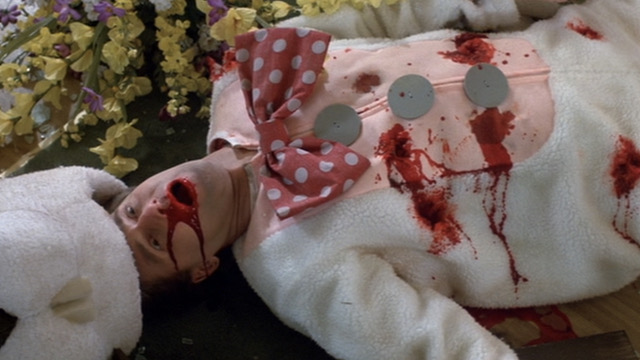 Brad and Charlie were the best friend duo of the first movie. They’re kind of like Doc and Marty except Charlie is the exact opposite of a genius scientist. Don Keith Opper does play him like the bumbling idiot with some cartoonish charm. Scott Grimes actually looks a little like Marty in this movie. He was really early in his acting career at this point so he was trying to find his stride on camera. We're also joined by the Girlfriend from Hell herself, Liane Curtis, as Megan the neighbor girl and Brad's love interest as he is visiting his grandma's place on the other side of town. Grover's Bend is initially devastated when the Critters emerge from their eggs which they painted for Easter and interrupt the mass. Then, the Critters invade the town burger joint Hungry Heifer's, which has a contagious jingle. It's a good thing they only play it twice.

Ug and Lee (haha, get it?) are armed with laser cannons that make the fight seem rather one-sided. On a surface level, the image of a stern-looking man and a Playboy model blasting little fuzzballs with teeth into bloody chunks is hilarious. At one point, Lee assumes the form of the Hungry Heifer manager played by nerd extraordinaire Eddie Deezen. You get to see him run around in her skimpy clothes whacking Critters with a stick.

Sheriff Harv (Barry Corbin) and the rest of the town take refuge in the church as the fuzzballs roll around the streets as they own them. Lee is eventually swarmed and eaten and Ug becomes so distraught that the townspeople of Grover's Bend have no choice but to step up for themselves. Brad leads them in a plan to trap the Critters and blow them up, but this fails as they form a boulder that can pick anything clean in seconds. That is what you see on the cover. In the end, Charlie uses their spaceship to destroy the Critters. Grover's Bend is now Critter-free with no scene before the credits to say otherwise. As for the rest of the world, the series had other plans. 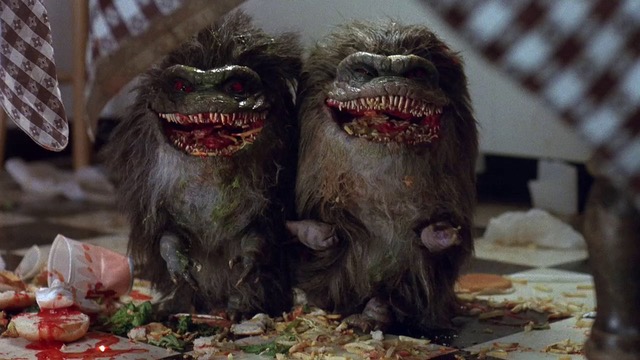 Right after Critters, they knew they had to make a second one. Instead of having established filmmakers spearhead it, writing and directing were taken up by newcomers David Twohy and Mick Garris. Twohy doesn't think highly of his Critters II writing credits, but it was literally his first one –no need to be too hard on oneself. He would go on to write Riddick, The Fugitive, Waterworld, and GI Jane. Garris had his first directing role with Critters II. He had been working in TV and even with Spielberg when he was approached for it. He had enjoyed the first one and wanted to make it even more terrifying. Whether or not he succeeded is up to the viewer. His Stephen King adaption of Sleepwalkers, I think, is his scariest work. Garris would also go on to do several obscure Stephen King movies and tv like Riding The Bullet and Bag of Bones. Also, he was a zombie in Michael Jackson's Thriller video, pretty sweet.

We need no introduction on Liane Curtis after last year. Unfortunately, the movie doesn't give her a lot to do. She didn't look like she was having as much fun as she did in Girlfriend From Hell. It's still nice to see her. She's a good pair with Scott Grimes though -like Billy and Kate from Gremlins. I won't gush on him anymore but you should see his vocal range. Look up him singing in American Dad, he does the best ‘N SYNC impression. It's both funny and good singing. They also give him a lot of funny material. In fact, in one American Dad episode, Grime's character actually suggests Critters II for a movie night. This isn't entirely the case for him in Critters II as he is limited by a cookie-cutter script. But hey, everyone has to start somewhere. Leonardo DiCaprio made his film debut in the sequel after all.

Returning to do the special effects of the Critters is the Chiodo Brothers, who were releasing Killer Klowns From Outer Space that same year. The scene with the Critters congregating in the Hungry Heifer is some of their most memorable work. When people think of Critters, they often think of that scene. Over 50 Critter puppets were created for the film. Respect to them for not recycling ones from the first movie. The climatic Critter ball is an impressive piece of theirs as well. I wonder if it is weightless. It would've been really fun to play with it like a beach ball. The Chiodo Brothers would continue their work on the Critters series in the sequels. 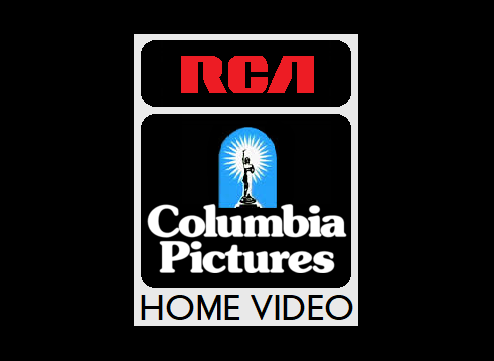 Critters II was the last Critters movie to be released in theaters. This could be due to the fact that it underperformed on a $4 million budget with a $3.8 million gross. It also didn't get the same praise that the first one did. Ebert said it didn't have the energy of the first and didn't need to be made. New Line Cinema decided that they would just release them on home video. However, the company wouldn't get their home entertainment department until 1990. So, the video release of Critters II after it left theaters was given to RCA Columbia Pictures. When Critters 3 and 4 were released, New Line Cinema was able to distribute the tapes themselves. RCA Columbia Pictures would be under several names by its parent company of Columbia Tristar –including EPIC Home Video which saw the release of Troll II.

Everyone knows about Critters in either a good or bad context and that is all thanks to their theatrical run. Terrance Mann and Don Keith Opper would reprise their roles in the sequels and keep in pursuit of the Krites around the world. 27 years after Critters 4, in 2019, they released Critters Attack! which featured the return of Dee Wallace from the first film. The same year, the web television series Critters: A New Binge was released on Shudder where the Krites were butchered by CGI. Warner Brothers have been in possession of New Line Cinema since 1996 so it seems they don't have any real plans to get a mainstream Critters project going. People running and screaming while getting chased and then chewed by fuzzballs ages great. It will always be funny. They should give it a second thought.