A vacationing family discovers that the entire town they're visiting is inhabited by goblins, disguised as humans, who plan to eat them. 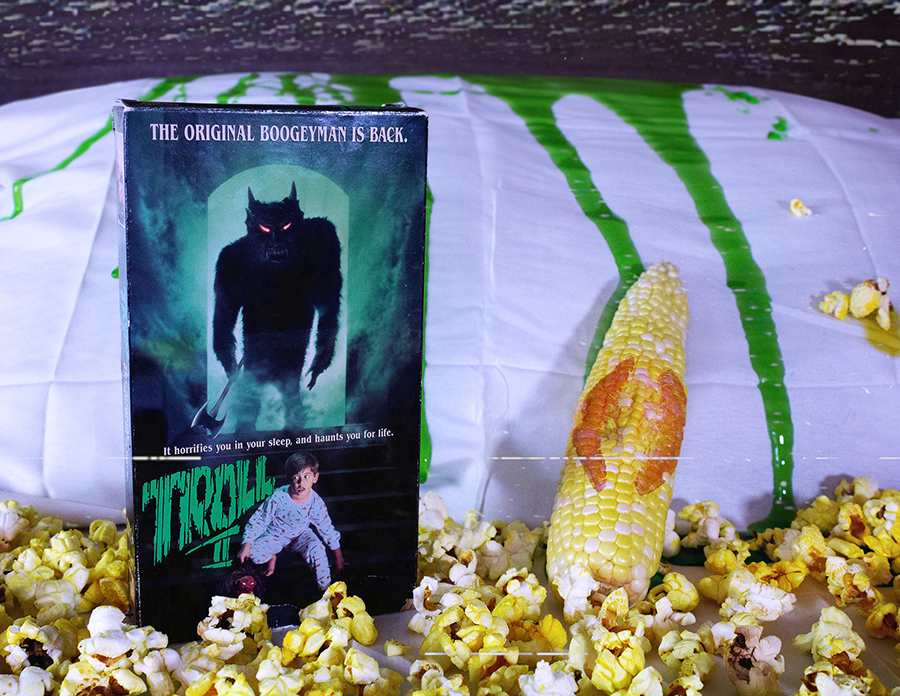 Troll 2: VHS of the Month Review 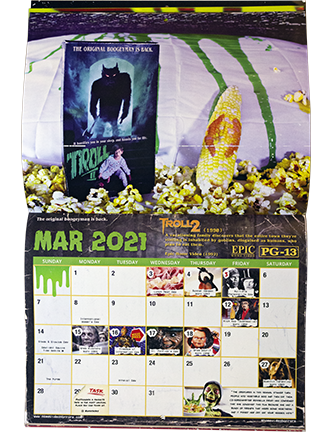 Oh my Gooooooooooooood! It's Troll II! It's March and Rotty Rentals is already breaking out the big guns with the forefather of all bad movies with the 1992 home video release of Claudio Fragasso and Rossella Drudi's visionary classic of the Waits family's vacation to the town of Nilbog- the kingdom of goblins. Truly, it's a tale of family devotion, letting go of those you love, and the horrors of vegetarianism that has been past on from generation to generation because of its kingly status amongst the stinkers of the video store. The creation and reception of Troll II can be described as a trip to the batting cages. It's a normal day, accompanied by the sounds of balls clashing against metal bats and the machines firing off. A couple cages down, Claudio Fragasso has brought his own equipment. He has a deep traditional love for baseball, but he's got his own ideas. The ball launches from the machine and he swats it underhand like it's tennis. The ball is hit with so much power that it begins to ricochet off the chain link walls and cement ground sporadically. He begins to draw a crowd as he continues to attempt to bat the ricochetting ball as it flies towards him. And incredibly, he's hitting it and the ball continues to bounce around the cage faster and faster. People start recording and talking pictures of this maniac in the batting cages. Then, the unthinkable happens, he hits the ball directly into the throwing machine. It sparks and sputters before exploding into flames. The spectators begin to cheer, that wasn't supposed to happen but they love it. They're going to remember that for the rest of their life. And just like that, that fellow Fragasso had a legacy.

There's three undisputed truths to life. One; we are born, two; we die, and three; there are no trolls in Troll II. The Italian production was met with so much skepticism by the American film marketers that they felt that it'd be best to premiere as a sequel to Troll (1986). A film that may or may not have been set in the Harry Potter universe where magical, fairy creatures invade an apartment complex. The original name, and our monsters, is Goblins. Cruel, vegetarian goblins that inhabit the town of Nilbog (Ahhh! It's Goblin spelled backwards!) that transform their victims into plants so they could be devoured meat-free. Which in its self, is kind of an oxymoron. 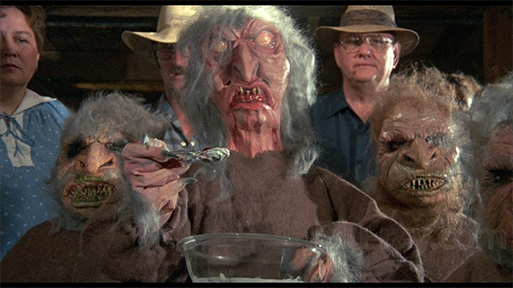 The bar is set for what an American family should be with Michael Waits (George Hardy), his wife, Diana (Margo Prey), and kids teen, Holly (Connie McFarland) and little Joshua (Michael Stephenson). Their grandpa Seth (Robert Ormsby) is still around, not in body but in spirit and a powerful one at that. He knows something is amiss with the family's destination and only with his help can Joshua save his family from meeting a green death and becoming goblin chow. Squad goals are set with the inclusion of Holly's boyfriend Elliot (Jason Wright) and his R.V. buddies (Darren Ewing, Jason Steadman, and Drew McConnell). Though the latter make for a great body count. Orchestrating all this is the druid and goblin leader Creedence Leonore Gielgud (Deborah Reed) with all the charm and charisma of a Mighty Morphin Power Rangers villain. Dark magic and fairy creatures meet wooden acting, unintentionally hilarious moments, golden turd dialogue, and so much insane incentives to keep you glued to your screen. Hospitality being pissed on, boyfriend might be gay, and pop corn as an aphrodisiac are only a couple of stones to this Infinity Gauntlet of sweet, savory stink.

But what happened? How did it turn out this way? Well, the production of Troll II was largely Italian. Actors recalled a language barrier and unorthodox methods of directing. For a lot of people involved, they either had no idea what they were filming or had just seen their lines for the very first time before stepping in front of the camera. Most of the locals of Nilbog, were, well, locals of the small town in Utah where they filmed. In fact, Don Packard, who played the store owner in a particular scene, was a full blown mental patient. Still fresh in his treatment at a clinic nearby, he took the role not knowing what was going on, even on camera. The actors who had the pleasure of playing a goblin were only hired because of their short stature. One actor was so small that the monster gloves wouldn't fully fit his hand so they had to sew it into the burlap sleeve of the costume. And yes, the costumes were rubber masks and hands with a burlap sack as a robe. That goblin actor can be seen in movie waving his hands around but his fingers remain limp like a gloves. Not many of the actors were experienced, George Hardy responded to the casting call for fun and Michael Stephenson was looking for the big break in his child acting career. 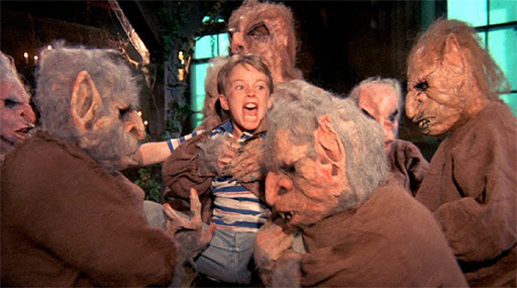 Despite being one of the worst movies ever made, Troll II enjoys a plentiful cult following that would make both Ed Wood and Tommy Wiseau jealous. To this day, fans continue to congregate at annual screenings of the film in convention centers and rented out movie theaters in a tradition started by Troll II fans in Texas. Every day, new people are drawn in as people shared the film like it was an entry in the Star Wars series. Those who were kids at the time of its video store release are going to show it to their own kids one day. One's first viewing session is often seen as a rite of passage-a fantastic and scared moment that everyone wants to be present for. And much like the characters and plot of Star Wars, movie fans know the lines the characters will say when they first see their faces on screen and the situations that await them.

But the greatest thing about Troll II, are the people involved. They're good people. In 2009, Michael Stephenson released his documentary, Best Worst Movie where he follows up with the cast in crew from the production 20 years ago. George Hardy runs a successful dental practice in his home state of Alabama (still to this day) and is a bit of a pillar to his community. Even his ex-wife had nothing mean to say about him. He, along with Stephenson and Packard, embrace their role in the film as opposed to running from it. When they walked out on stage during the Troll II convention, the standing ovation from adoring fans said it all. Fragasso, while his horror film never got the screams and gasps he thought it would, appreciates the cult status of the movie. It's making an impact that counts to him even if it is poorly made. Besides, would Troll II get the attention it would if the film was even slightly made better? Most likely not. 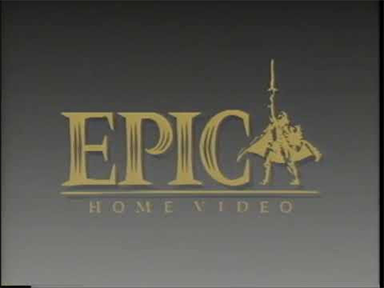 Troll II received its home release by EPIC Home Video from EPIC Productions in 1992. At the time, it appeared to be owned by Columbia Tristar Pictures. Strange how such a small production was able to be picked up by a large distribution company. This VHS tape is where people saw the movie for the first time. When word got out of how uniquely awful it was, tape heads flocked to the video store for their copy. Once they were done, they'd lend it to a friend and pass it around classmates and coworkers. It also makes several appearances in the hands of Troll II aficionados in the 2009 documentary. In fact, the EPIC Home Video release is the very same copy that Michael Stephenson got on Christmas morning 1992. He was so excited. His big monster movie that would boost his career and fame was finally out on video. Unfortunately, after twenty minutes of running the tape, this dream would be quickly dashed. Today, this tape is enough to make any OG Troll II fan salivate.

At the end of the day, we have to thank Rossella Drudi's friends who had the gall to go vegetarian. It had annoyed her so much that she conceived an idea for a monster movie. Where instead of blood, guts, and flesh, the monsters hungered for vegetables. Maybe we could go as far as to call it "satire" when it comes to "you are what you eat." Indeed, whoever you are, we have you to thank for inspiring the best worst movie of all time which has a special place in the heart of film history.