Two years ago, a young woman named Valerie was burned after entering a tanning salon. NOw, her twin sister, Rhonda, runs a local gym where, all of a sudden, people are being murdered. 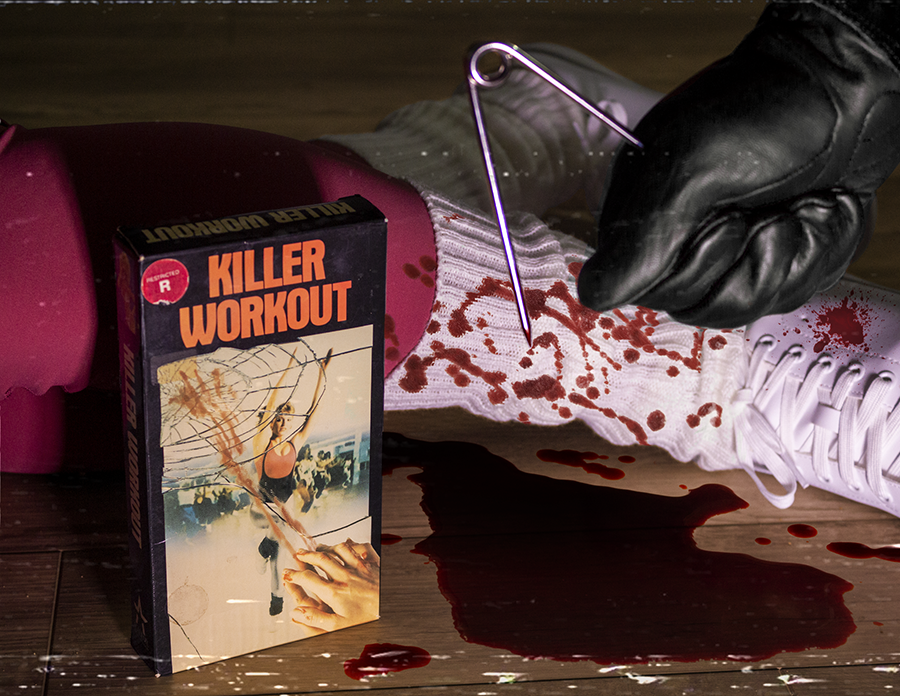 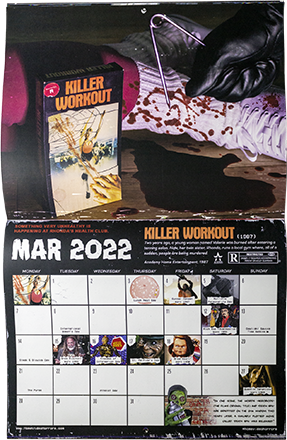 Fitness club culture in the 80s is hilariously memorable. The leotards, the gym rats with their really short shorts, and the music they blared in the aerobics dance classes. At the same time, video stores had workout tape sections. If I was around, I probably would've poked fun at anyone wearing leopard-skin spandex and dancing to synth music. But then they beat me down with their nice arms and legs because as silly as it all was, they got results. This month's flick pays tribute to beautiful people in their sanctuary that is the gym with a slasher (or rather poker) take. It's the Prior brothers' 1987 video store exclusive, Killer Workout.

Getting a straight-to-video release is great because the movie doesn't have to suffer such heavy editing or censorship. So, there aren't any alternative or extended cuts of Killer Workout. But we do have some alternative titles. Its original title was Aerobicide, but I guess someone at the distribution company spoke up and said that people would think it was an airplane horror movie. Death Spa is another one, and a later film would end up using it. I think Killer Workout is a good title because if you were in a video store, you can slip into the workout section, and maybe, just maybe, someone would be fooled into thinking it was just another fat-burning regiment. The box art is almost conspicuous enough. 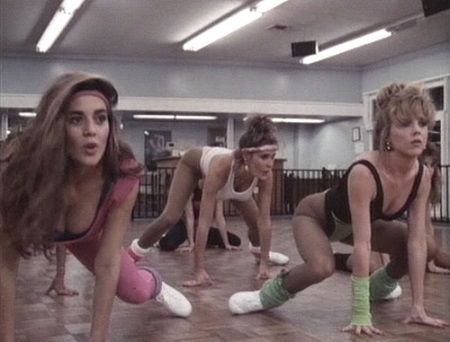 However, the general viewer may not be scared or even off-put by Killer Workout. The Toxic Avenger is way more intense when the fitness center becomes a killing floor, and that was played as a comedy. At its core, Killer Workout is a modest slasher production with the only unique aspects being the setting and the murder weapon. Rhonda (Marcia Karr) runs a downtown L.A. fitness club. Her twin sister Valerie (also Karr), appeared at the start of the movie in a tanning bed accident just as she got a break in her modeling career. Valerie isn't seen for the rest of the movie as it takes place five years later at Rhonda's Health Club. One day after an aerobic session, a member (Teresa Truesdale) is killed in the showers by a killer with a big safety pin. Yes, that pin is the main weapon. I thought that photo art represented a specific moment, but that pin is universal for nearly every kill. It must feel like really bad hornet stings, at least until it hits your jugular, which is what the killer does in this case. I need to say that takes skill. The jugular vein in our necks is like 10 millimeters wide. The smallest pin size available is 19 millimeters. This isn't nitpicking, this is feat appreciation.

Not to worry, Detective Morgan (David James) is on the case. At the same time, a new face and Adonis-in-the-making Chuck (Ted Prior) shows up at the gym insisting that he has been hired. We also meet local beefcake Jimmy (Fritz Matthews) who's always watching Rhonda do her sessions, and Jaimy (Teresa Van der Woude) who more or less co-runs the place with Rhonda and hits it up with Chuck. Along the way, we don't get to know Rhonda's fitness group outside of their nicely cut bodies before they literally get cut themselves. There's a nice sauna kill in there, but it's all done with the pin. Suspicion is cast on Chuck and Rhonda, but most of all Jimmy.

If you aren't big on spoilers, then skip to the next paragraph because the ending is one of the best things Killer Workout has going. Chuck is revealed to be an undercover snoop, thus his sudden employment. He catches the dim Jimmy in a compromising situation and an action-film-esque fight ensues. Jimmy ends up killing Chuck and Rhonda comes to find out. He tells her it was out of his love for her, but she ends up shooting him. Of course, as we all inferred, Rhonda is in fact Valerie as Detective Morgan found out earlier. Morgan believes that she was the killer with the motive of getting back at beautiful people. She insists on her innocence the whole time, and the general viewer grows to believe her. Even at the end when Morgan has her at gunpoint. Having let a killer go before, Morgan was willing to kill her without evidence because he was so convinced. She escapes, but of course that big pin is sitting snugly in her desk pocket as more beautiful people sign up for her fitness club. Werner Herzog would've given the closing monologue, "thus ensuring an endless vengeance of stolen beauty." 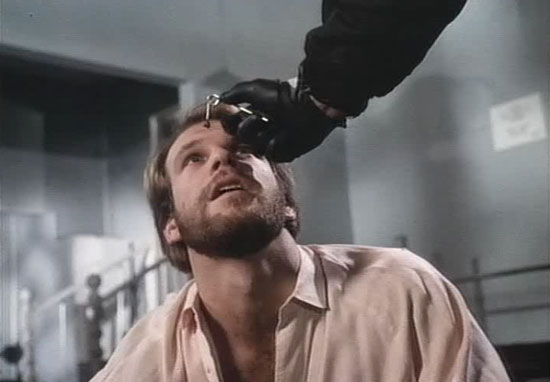 There isn't much more to tell about the story of Killer Workout. It's one of the most obscure titles we have next to Toxic Zombies. But the main stories about movies like these come from the creators -enter the Prior brothers, David and Ted. You can tell how their relationship was. David was the brainy movie director and writer while Ted was the good-looking star with an action-hero build. They began with their 1982 slasher Sledgehammer where Ted played a teen among friends communing with the spirit of a killer. In 1985, they did an action flick called Killzone with Ted in a Stallone-like role. Deadly Prey was another action movie they did that was released the same year as Killer Workout. They produced such movies and tv as this until the 90s. Whatever the movie, David was always sure to film his brother flexing. Sadly, David passed away in 2015 due to health conditions as Ted described it. Never forget David Prior as he made history. Sledgehammer was one of the first scary movies to be filmed on video.

Let's talk about the music of Killer Workout because they have a really good playlist. It's funny that while serial murders are both being investigated and committed on the grounds, Rhonda is still allowed to hold sessions. I mean knowing her now, she obviously is going to. But there was no effort to lockdown the fitness club or anything. Because of this, we're treated to several workout montages, each set to different tunes. The workouts are legit and I feel David's direction was to literally hold and film clinics. You got such tracks as "Woman on Fire," "Dust it Off," "Knockout”, and "Some Things Never Change" by artists like The Lost Playboy Club. There is also a track entitled "Aerobi-cide." If there isn't an official Killer Workout playlist yet, it can be easily put together. 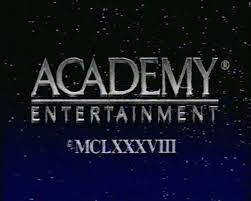 There are no big numbers to report on because Killer Workout wasn't a theatrical release. It went right to the video store courtesy of a little distribution company called Academy Home Entertainment. This was one of many small VHS distributors at the time which lived until the 90s. Most anyone has to go by is their logo like many of them. Low-budget horror movies are often the easiest to distribute as they are some of the most commonly independently produced movies. It's likely that Academy Home Entertainment also handled the release of the Prior brother's other early movies.

I think that the IMDb rating of Killer Workout is a little too harsh. It's at least a 5.2, absolute max of 5.8. As for its legacy, it fell into obscurity and I'm not sure if anyone has picked up the rights for it if it isn't creator-owned. I was able to find it on YouTube under its original title. The VHS tape on the calendar is a collector's item and fetches at least $200 from what I've seen. There has never been a DVD release or a digital platform that streams it yet. While it's fun to watch, it gets lost under a sea of other movies of what happens when things get bloody in the gym. This gives this story about beauty its own appeal. Thanks for remembering films like this, Rotty!