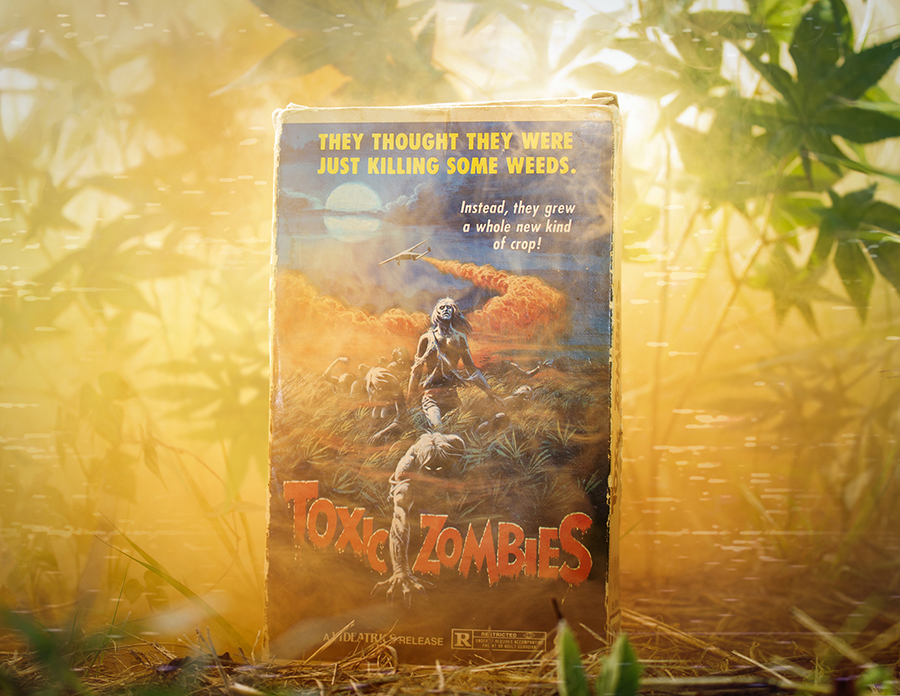 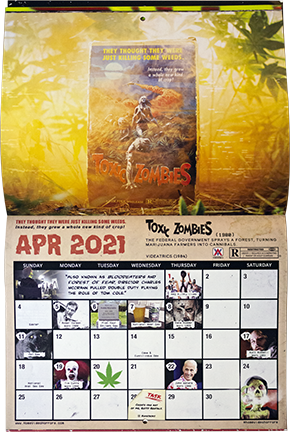 April is a holiday month and has almost the same energy as December. Not just nationally, but around the world and multiculturally. You have April Fool’s, Easter, Passover, Ramadan, and Arbor Day. So, there would be so many April-themed movies to pick from. Rotty Rentals could’ve gone the April Fool’s Day route with the 1986 slasher flick of the same name. Or, the multitude of Easter-centric flicks that often feature a blade or power tool wielding bunny man. That’d be a bit too simple. Home Video Horrors took the road becoming more traveled with recent legislation with a zombie flick from the 80s which screams 420. This month, we’re greening out to Charles McCrann’s 1980 independent production of Toxic Zombies. Also sometimes known as Bloodeaters or Butchers of the Damned…or Bloodeaters: Butchers of the Damned (wow, really?) Or, The Forest of Fear and The Dromax Derangement. Who thought of all these alternative titles? We’ll just call it Toxic Zombies, makes it easier.

With Toxic Zombies, what we have is an independently produced zombie film during a time when mainstream pop culture had just finished shaking hands with the contemporary living dead genre thanks to 1978’s Dawn of the Dead. Like the living dead, there was an audience that had a hunger for human flesh and body parts being tossed around on the screen. Charles McCrann was one of those people. So much so, he produced, directed, and starred in his own Toxic Zombies. While the causal moviegoer may identify it as a George Romero rip-off, it’s really more of a love letter to his movies. There’s also hints of humor as the movie takes itself lightly. McCrann was a fan of horror and W.C. Fields’ comedy. In a way, Toxic Zombies brings both together in a low budget B-movie combo. 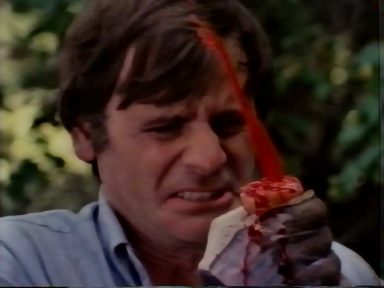 McCrann brings us the story of marijuana growers, that could really take a lesson from the Trailer Park Boys’ handbook in illegally farming pot, who are crop dusted with the deadly orange gas Dromax. As they vomit their guts and bleed their eyes out, it becomes clear that anyone infected with this toxic gas becomes a flesh-eating ghoul. The forest becomes the infected hippies’ land as they dismember and consume any who enters. The corrupt government officials who ordered the planes couldn’t care less. They just wanted an excuse to test their new weed-killing gas in the crackdown on the devil’s lettuce. But there’s one local official-by the book and family man, Tom Cole (Charles McCrann using his middle name Austin as his last in the credits) who must save his daughter Polly (Beverly Shapiro) and her friends (Kevin Hanlon and Judy Brown) who are having an excursion in the cannibal woods.

So, this isn’t a zombie apocalypse event rather it’s an isolated incident like Re-Animator. I’m not entirely sure if anyone that the infected killed actually reanimate or turn. They just kind of feed on them like a shark on tuna. Naturally, if you’re going to have that in your movie, you’re going to want to showcase some gore. McCrann’s direction included a lot of static gore of dismembered and chewed on remains after the kill is done. There are instances where he does show some detail in the zombie attacks. To any living dead buff, there’s nothing like the visual of top and bottom teeth closing in around the skin and tearing it. Because of the budget, they could probably only show so much. But that didn’t stop the United Kingdom from banning the film. That’s right, McCrann’s Toxic Zombies was actually classified as a Video Nasty at its time. That’s truly impressive. If you make a movie that wasn’t or isn’t banned in at least one country, then you need to try harder. 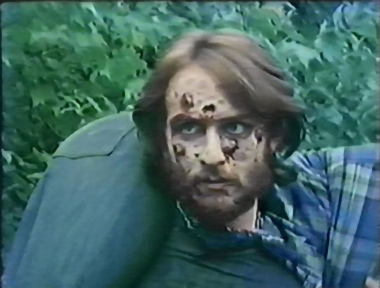 Toxic Zombies an impressively independent movie. So much so, that the credits aren’t even a minute long. Truly makes you wonder how many people in the credits we see in the theater actually do anything on the movie. Despite not being a long title crawl, Ted Shapiro produced a chilling piano soundtrack almost as good as the Halloween theme. At this point, any names I’ve mentioned haven’t been ringing any bells to even to the most avid B-movie fans. The cast included Paul Haskin, Claude Scales, Dennis Graber, and Debra O’Leary as the farmers turned ghouls. Among them is John Amplas. For those fans with an eye for detail, that name may ring a bell. Amplas has been a long-time collaborator with George Romero. Many knew him by then as Martin, the man who believed he was a vampire from Romero’s 1978 film of the same name. He’s had a role in Dawn of the Dead and Day of the Dead too. But everyone may better know him as the cake-hungry zombie of Nathaniel from the Father’s Day segment of Creepshow-another Romero joint. Toxic Zombies really is a love letter to the living dead series and its creator.

Charles McCrann was humble about his film project. He didn’t harp on it too much as he moved on with his life and career. He had gotten a law degree from Yale, but his legal knowledge and expertise would land him a job at Marsh and McLennan’s insurance department. In time he became a company executive, then vice president. Sadly, McCrann was a victim in the September 11 attacks in 2001 at the insurance office in the trade center. When it was discovered, Toxic Zombies was played on USA Network, the same station it had originally aired. According to those who knew him, McCrann was a deceptively funny man. Often making a phony straight edge first impression of himself before duck walking from the room-leaving anyone wondering who the hell they had just met. The eccentric always make for the best filmmakers. If he had gotten back into film making whenever he found time again, he would’ve only gotten better. If you can climb the corporate ladder, you can climb the entertainment ladder.

Toxic Zombies was at best a made-for-TV movie. The first time when people saw it was on USA Network in the early 80s. McCrann had retained the copyright and Parker National handled the distributing. Toxic Zombies would receive limited video release under the alternate titles, but its mainstream video store release came in 1984 with Videatrics. That release is our particular VHS of the month. Rotty Rentals definitely took this from the top shelf of his collector’s cabinet because this tape will fetch a pretty penny and it can be a little hard to find. The particular tape I was able to get was the Queasy Art release for a fraction of the listed price of the Videatrics one. Little information is available on these video companies because they probably came as quick as they went-releasing lesser-known and produced films as they did. The Queasy Art release comes in a black clamshell package. The label has all sorts of fun reviews from the foremost authority on undead ghouls: The Ghoul Gazette and the NAACN (National Association for Advancement of Creatures of the Night). Rotty, you should become an ambassador. 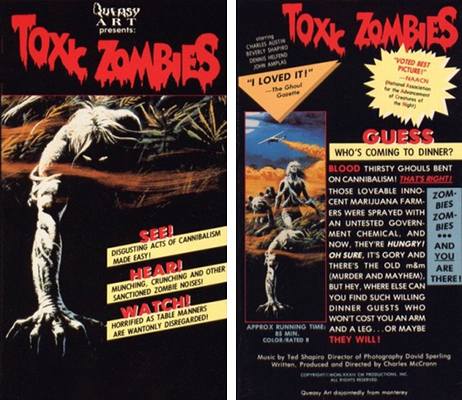 When it comes to reviews, Toxic Zombies has negative. Naturally, but every master chef has their first restaurant shut down. Some acting could be far better and the tone more consistent with its comedic intentions. Despite that Toxic Zombies has made a place for its self in the living dead genre and had a part in starting the backwater zombie craze prevalent in the 80s. People began preferring zombies in a dark forest setting rather than an urban one like a mall. McCrann helped lure the zombies from there. He had the right idea, if you’re looking to get into horror filmmaking, start with zombies in the woods. No giant monsters or mythical creatures like goblins (cough, cough). Zombies are often cheap to make since they’re just extremely disheveled people. The extremely limited budget can then go to the gore effects as opposed to a monster costume. You’ll also save big on filming locations when out in the wilderness.

Toxic Zombies wears its Video Nasty label like a badge of honor and continues to be a lesser-known flick of the genre. However, with digital libraries and the internet, people can learn and put together the legacy that McCrann left behind just as I did. One of an eccentric professional who was a fan of zombie and horror movies and set out to make his own. One so gory that it would be banned in another country. Here’s to you, legend.