When Terry's twin, Todd, escapes from the asylum, it's time for Terry to get out the old machete. 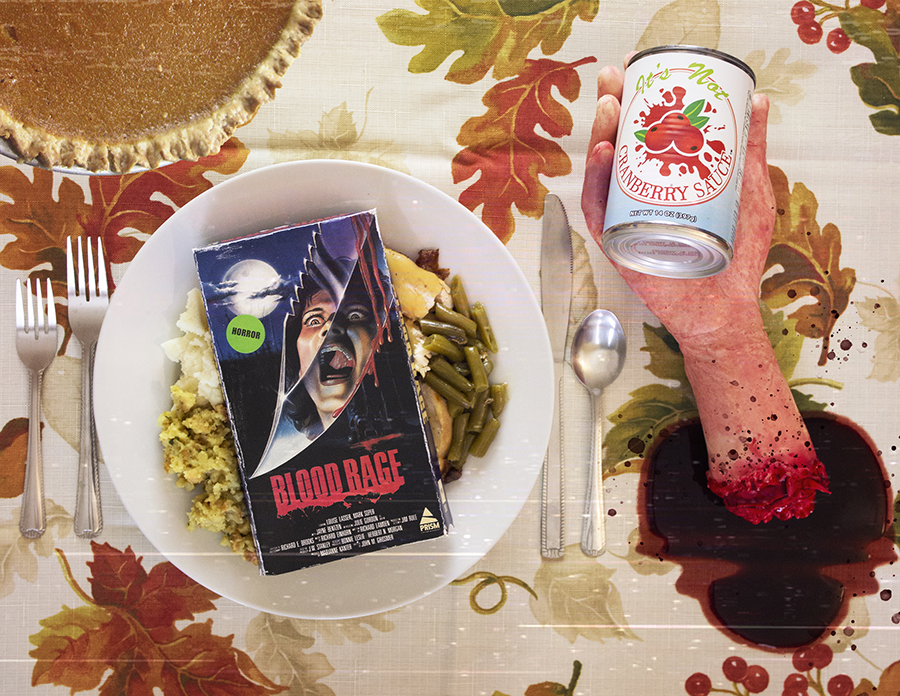 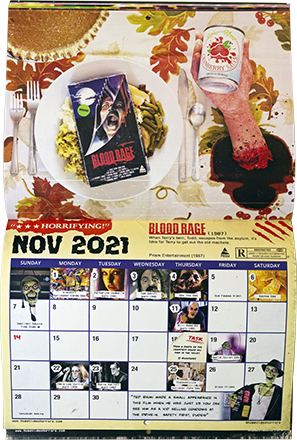 Thanksgiving has high horror potential. It’s almost kind of barbaric, everyone coming together to dismember and devour an animal. Regardless, we love it because it brings us together and we get to stuff ourselves. But you have to admit, the premise and iconography of the holiday is fun to exaggerate into something scary. Universal Studios did a terrifying take on Thanksgiving with their Halloween Horror Nights house Holidays From Hell. You can have demonic leprechauns, Easter bunnies, or elves chasing after you, but walking into a living room with a slaughtered family around a table with a demented spread featuring a roasted person with an apple in his mouth and all is the scariest thing. And, that was before the turkey monster with an axe pops out. Thankskilling was late to the VHS scene and it’s a bit too easy of a pick to ring in November with. This month, Rotty Rentals takes the hidden gem that is Blood Rage from the top shelf of his collection.

While Blood Rage has the year 1987 attached to it, it’s more of a 1984 film since that’s when it’s taking place, and the fact that it was filmed in 1983. Of course, no independent horror movie with a limited release and low-level distribution is complete without its alternative titles. For Blood Rage we have Nightmare at Shadow Woods, Slasher, and the working title of Complex. While none of its titles would suggest it’s a Thanksgiving movie, all drafts of it took place on Thanksgiving night - the night on which Todd Simmons came home. Slasher is the most accurate title because what we have here is a product of the time slasher movie with all the influences and tropes we love. Blood Rage is about a broken family tragedy during childhood, a time skip so the consequences come back in adulthood, a “sex is bad” message, obvious insanity being the true culprit, and a signature weapon of choice for the killer.

Todd and Terry lived a peaceful childhood with their young, single mother Maddy (Louise Lasser) until the night Terry decides his mom has ruined the act of copulation for him and must punish anyone who practices it. So, it was at that age he decided to become an axe murderer. But he and Todd look alike, so he had no problem pinning it on his brother. We have our time skip and the main setting of Shadow Woods being introduced as the home of Terry (Mark Soper) and Maddy. Todd (also Soper) has been in an asylum all his life. However, he doesn’t have a Dr. Loomis in Dr. Berman (Marianne Kanter), who sees innocence in his eyes rather than evil. Maddy still visits him but it’s obvious Terry is her favorite. Terry is doing alright for himself too. He’s a good student and has a friend group from school - Gregg (Chad Montgomery), Andrea (Lisa Randall), Artie (James Farrell), and Karen (Julie Gordon). Brad (William Fuller) is the owner of the Shadow Woods community and announces his engagement to Maddy at Thanksgiving dinner. Something at the moment awakens in Terry. Something that has been asleep for the last ten years. Perhaps this triggered the “blood rage” as the title speaks. At the same time, Todd has escaped and only he is privy to who his twin truly is. Naturally, it’s going to be a long Thanksgiving night in Shadow Woods. 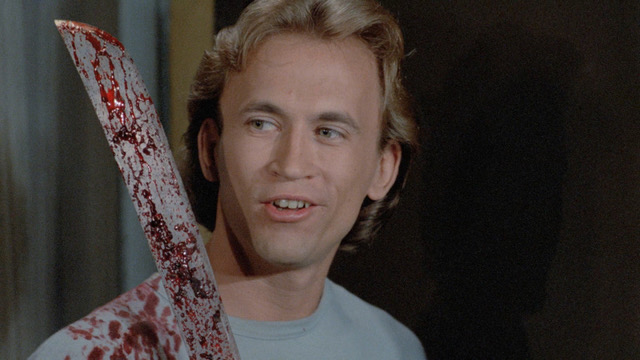 And long is how it feels. I mean that in the best way given Blood Rage’s 82-minute runtime. This movie has you on the edge of your seat after about ten minutes of introduction. Right away, the bloodshed starts and Terry becomes the boogeyman of Shadow Woods. If you ever wanted to see what Victor Crowley would be like in the 80s and was handsome, this is the movie for you. I also like to describe watching Blood Rage as watching a marble that you once held in your hands roll down a huge flight of stairs before you have to go down and get it. But the problem is, with each step time seems to go slower. It’s like Halloween if the entire movie took place on the night when Laurie is babysitting at the end of the movie. Terry’s rampage feels endless and it especially helps that everyone believes it’s Todd so he’s free to mingle and leave with the group as he pleases.

Something that’s so memorable about Blood Rage is the bloodshed. Everyone remembers how brutal-looking some of Terry’s kills are. The whole movie is a mix of cutaway and zoomed-in death scenes, but the aftermath shots of all the practical gore effects. While Terry isn’t devouring everyone in the spirit of Thanksgiving, he certainly is dismembering. That’s Brad’s hand there in the photo art, meanwhile, Dr. Berman straight up got cut in two like Darth Maul. How did he even do that? The violence isn’t contained to everyone in Terry’s household and friend group, neighbors like Bill (Ed French) and Beth (Gerry Lou) are unfortunately caught in the crossfire. Bill’s severed head with the wires wrapped around it is another memorable one.

It’s insane to think, but I actually didn’t know Todd and Terry were played by the same person until the very end. I guess I wasn’t expecting that much range from an actor in such a B-level production. It’s true, Todd is like Angela from Sleepaway Camp while Terry is like Patrick Bateman from American Psycho. While it may not be a textbook, Terry is a pretty good example of what a sociopathic psycho would look like. Mark Sopher would go on to have a modest career in television. We have a lot of lesser-known talent in this movie with the exception of Louise Lasser. At the time, she was married to Woody Allen. You may also recognize her as Mrs. Franken from Frankenhooker. As Maddy, we see how a mother determined to keep everything together fares in the slasher world where family always finds ways to come apart. The whole movie acts as a setup for the punchline that is the final scene as we finally see Maddy’s true colors as well. Of course, we also have a young Ted Raimi in the opening scene. He was 19 at the time it was filmed so that would mean he was around 23 when it was released. 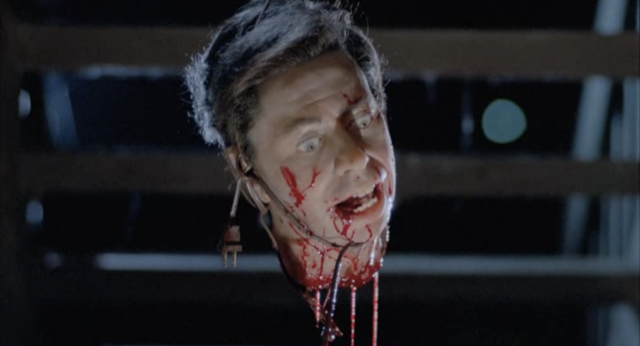 Blood Rage was largely a Florida-based production with John Grissmer directing, Bruce Rubin writing, and Marianne Kanter producing. Kanter had largely crowdfunded the movie and filming started in 1983. Kanter would also have to play Dr. Berman because the actor they had signed on never showed up to the set. Jacksonville acted as a location with the University of North Florida’s nature trails and reserves appearing as Shadow Woods. The community scenes were filmed in the western part of town. There was also filming in New Jersey for the drive-in intro scene. I cannot seem to find the budget for this movie anywhere, but there is no way that it was over half a million. I’m not sure it even made it past $200,000 or even $100,000. It was entirely locally financed by Jacksonville. Apparently, there was also drama on the set between Lasser and Grissmer. The director even almost quit but was able to be talked down by Kanter. She paid and raised money for this movie and she wasn’t going to let it go under.

It was unfortunate that Blood Rage was seemingly put on the shelf for a couple of years before it was released four years later in 1987 with an extremely limited release. The Film Concept Group had finally picked it up, but under the condition that several of the gory scenes be cut. I wonder why that is. It happened with Toxic Zombies being banned in the United Kingdom. I guess the lower the budget the more realistic the gore is. For its release, Blood Rage was under the title, Nightmare at Shadow Woods. Some scenes were even cut out and added like when Maddy visits Todd in the asylum at the beginning. They did a little creative angle with the matinee tickets with the tagline “not all nightmares are on Elm Street.” I would be more inclined to believe if they had kept all the scenes in because, without the gore, Blood Rage can be just another cheesy-acted, generic slasher. Kanter was clearly right in putting most of the budget towards practical effects. 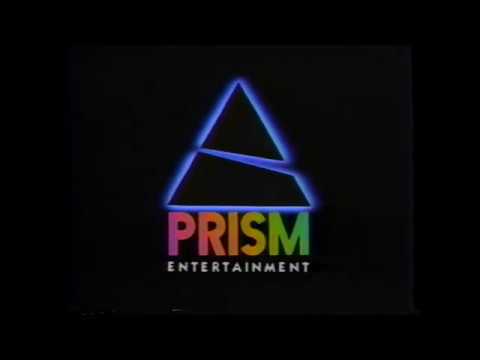 The theatrical run of Blood Rage was so limited that it could be said to have barely grossed any money at all. People actually became acquainted with the movie when it was released on VHS that same year by Prism Entertainment. Holy moly, this one is the most valuable one Rotty had brought out this year and the only one I couldn’t get on VHS if you count Toxic Zombies. The asking price on this one is nearly $500. If you have this tape, treasure it. People would go to the video store to rent or buy the Blood Rage version of the film while cable television was still playing the Nightmare at Shadow Woods cut. As small as it gets, Prism Entertainment was a video distributor in L.A. from 1985 to around 1998. They were busy with over 300 VHS releases throughout their life. Some of their releases included the 1970s Marvel Comics video library. Literally, comic books on VHS tapes that you can read along to. Of course, the real money to be made is with independent horror movies because there’s no video section like the horror section.

The good news is that Blood Rage recently saw a reemergence with its Blu-ray release in 2015 by Arrow Films. This limited edition new-age beauty has new cover art, three discs packed with unseen behind-the-scenes interviews and outtakes. Both versions of the film are included so you can see it as Blood Rage or Nightmare at Shadow Woods. I personally can’t imagine how someone could watch Blood Rage without all the blood, or as we call it during Thanksgiving, not-cranberry sauce.

Want your own It's Not Cranberry Sauce prop can? 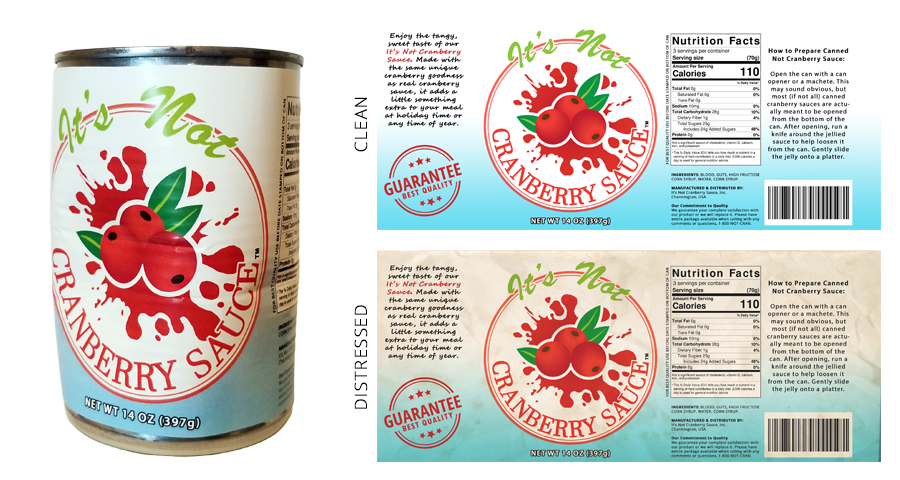