Ten teenagers party at an abandoned funeral parlor on Halloween night. When an evil force awakens, demonic spirits keep them from leaving and turn their gathering into a living Hell. 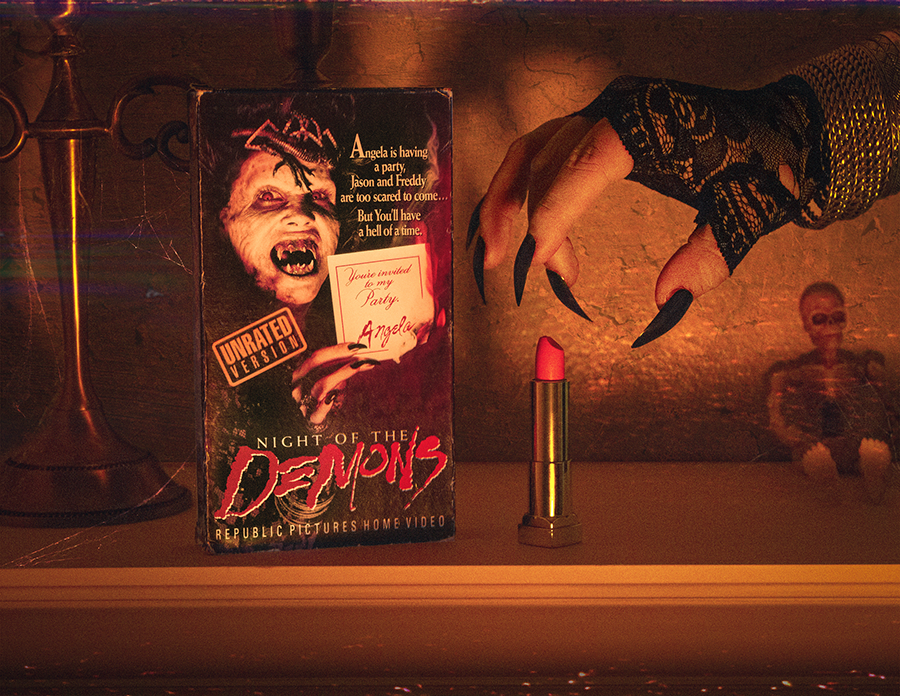 Night of the Demons
VHS of the Month Review 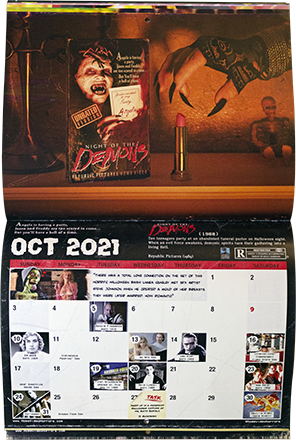 True Halloween-heads or Halloweeners don’t count down to the 31st. For us, the celebration begins right at the beginning of the month. Halloween is pretty much a celebration of October and horror junkies are eating well this month with Chucky and Michael Myers returning to the center stage. But for many of us who surround ourselves with scary movies on tape, disc, or bytes -Halloween is all year round. Still, what better to observe the modern passing of Samhain than with a good old cult horror flick. Pretty much all contemporary horror icons have roots in small productions that would be recognized by the mainstream which would naturally lead to sequel demand. Home Video Horrors does what Home Video Horrors does best and pulls one that flew under the radar for most, yet still had two sequels and a modern remake with Angela from Kevin S. Tenney and Joe Augustyn’s 1988 supernatural scare-fest Night of The Demons.

Demon possession and slasher tier kills have always been the backbone of the genre and they come together here for a mean combination. In addition to slashers, the 80s saw a big spike in the production value of supernatural horror that was normalized by things like The Nightmare on Elm Street series, Poltergeist, and even Ghostbusters. The audience from the previous era of The Exorcist wanted to see more from the otherworldly antagonists, the places they hail from, and what they really look like. We would see a lot of these in the late 80s. Oh, look at that. It says right on the back of the box that Steve Johnson, who was behind the effects of the sequels to those previously mentioned movies and the first Ghostbusters, brings life to the demon which torments Angela and her friends that Halloween night in the Hull House funeral parlor.

Augustyn is a paranormal investigator himself and penned the story of ten teens in the late-Reagan era, Angela Franklin (Amelia Kinkade), Suzanne (Linnea Quigley), Judy (Cathy Podewell), Helen (Allison Barron), Frannie (Jill Terashita), Sal Romero (Wiliam Galllo), Rodger (Alvin Alexis), Jay (Lance Fenton), Max (Phillip Tanzini), and Stooge (Hal Havins) as they do a Halloween get-together at a haunted funeral parlor. That’s pretty much the entire cast with the old man and his wife who appear as a small b-story with Harold Ayer and Marie Denn. I’d like to interject with another haunted Chicago factoid that we have a Hull House that is also intensely haunted. Rather than a funeral parlor, it was a housing project for immigrants. The ghost of founder Charles Hull’s wife is one such spirit rumored to roam there to this day. Augustyn has probably investigated it himself and the name was a nice little reference. However, the real Hull House doesn’t have a powerful demon lord living in its basement unlike the one in this movie.

They had to do a séance. They had booze and plenty of room to pass out anywhere, but they had to do a séance. It’s a situation movie horror fans have seen played out many times before but it never seems to lose its charms -like a superhero story or roller coaster that hasn’t been changed in 20 years. Our cast of characters includes what can be seen as tired archetypes -Judy is feeble in every sense of the word, Susanne is a nympho, Sal is the perfect caricature of an 80s tough guy with the jacket and slicked hair, and several others fall victim to the “no sex” rule in horror movies. In a way, characters like these are our horror movie Avengers or Justice League in terms of how we come to recognize them. Of course instead of saving anyone they just get murdered.

Angela is further proof that girls with that name in horror movies are more prone to becoming the antagonist. Once the demon rushes out of the incinerator downstairs, it immediately takes hold of Suzanne and her -the planners of the party. The horrifying thing is that as the body count increases, so do the demons it seems. You can go with either there are multiple demons haunting the building under the one possessing Angela or the demon is so powerful that it can be in two places at once. Funny enough, each possessed victim has their own trait leading you to believe the former. Suzanne is reduced to a sexual Gollum-like state, Stooge becomes a piggish brute, and Angela almost acts as the leader, focusing on keeping everyone in the house and harvesting their souls. The lipstick though, do you ever think about where it goes? It’s funny, the moment I saw the photo art I knew that was going to come back in a strange way. 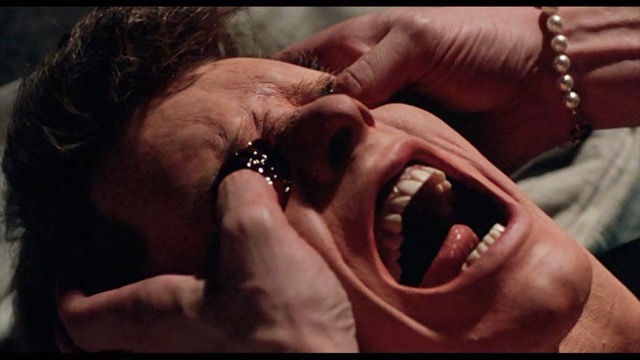 The quest for survival is largely thrust upon Sal, Judy, and Rodger. All exits have been locked and the brick wall surrounding the mortuary warped Blair Witch style so the gate is gone. Their adventure can be seen as predictable but there are moments that come as a surprise to the audience, all tropes considered -looking at you, Rodger, congratulations big guy. Of course, Piglet-like Judy would go through the never-give-up-and-be-brave arc. It’s a haunted house you wouldn’t want to walk through with all those narrow dark hallways. It doesn’t make the imagery any less scary with Angela rushing down the hallways in a ghost-float concealed by her dress with her arms outstretched and fangs barred while screaming “you’ll never get away!” We also have Return of the Living Dead’s Linnea Quigley baring her bosoms to us yet again -in erotic and scary context as she does best. The Trash zombie with her mouth open will always be horrifying. And yes, she and Steve Johnson got married after meeting over a mold of her breasts. Cupid’s arrow comes in many shapes and forms.

Director Kevin S. Tenney was in the director’s chair for the second time for Night of The Demons. A lot of his early movies were supernatural horror like Witchboard two years prior and its sequel in 1993. Tenney also has some science fiction direction under his belt with 1990’s Peacemaker and 2003’s Earth Alien and 1998’s Arrival II. Demons, witches, and aliens -that’s a film career any B-movie fan would want. Night of The Demons is largely a California production, having been filmed just before the summer of 1987 in L.A. The working title was Halloween Party. 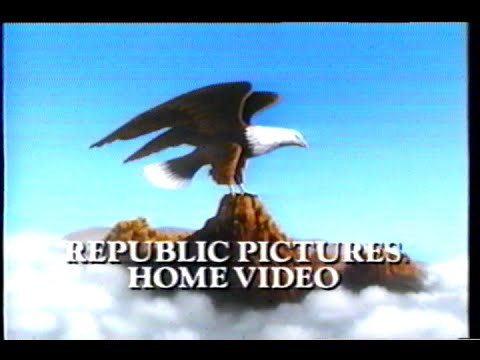 After its limited release, as most independently produced films were, Night of The Demons was picked up pretty quickly for a home video release next year by Republic Pictures, also based in L.A. Republic Pictures has unique roots from the Golden Age of Hollywood from the 30s to the 50s as a film studio which actually produced commercial feature-length films of its own. They produced several westerns and mystery films and even worked with the likes of John Wayne and Orson Welles. The production-distribution company was founded in 1935 by Herbert J. Yates also invested in 20th Century Pictures which would later become 20th Century Studios as we know it today. In the 50s, Republic Pictures focused on television until their studios closed in 1996. During the time of home videos, they would step up as a major distributor for the then-new media with their home releases being common in many tape heads’ collections. By the late 90s, it would be bought by Artisan then Lionsgate before wholly by Paramount.

As for its box office performance, Night of The Demons was given a regional nationwide release by Paragon Arts International starting in Detroit. I like the idea of movies sort of touring around the country like that. The film was able to gross $3.1 million on a $1.2 million budget. It’s not the Hollywood machine at work, but it’s still profitable. It also makes your mouth water thinking about just how easy it was to see a scary movie back then -at the main theaters, the small ones, and the video stores. They were truly everywhere.

Like Mary Lou and Angela Baker, Angela Franklin has returned a couple of times -all reprised by Amelia Kinkade except the 2009 remake. Night of The Demons 2 in 1994 saw Augustyn returning to write the story and Tenney wrote 1997’s Night of The Demons 3. While Angela didn't exactly return in 2009, Tenney was attached to the project as a co-producer. I truly enjoy how in some sense releasing a horror B-movie is like trying out for American Idol or The Voice. If it connects with the audience and they demand more even though there are several more just like it, we will see more of them. Halloween movie marathons are a celebration of those movies and how they break through. Night of The Demons has always reserved a spot on that playlist.