A socially awkward veterinary assistant with a lazy eye and obsession with perfection descends into depravity after developing a crush on a boy with perfect hands. 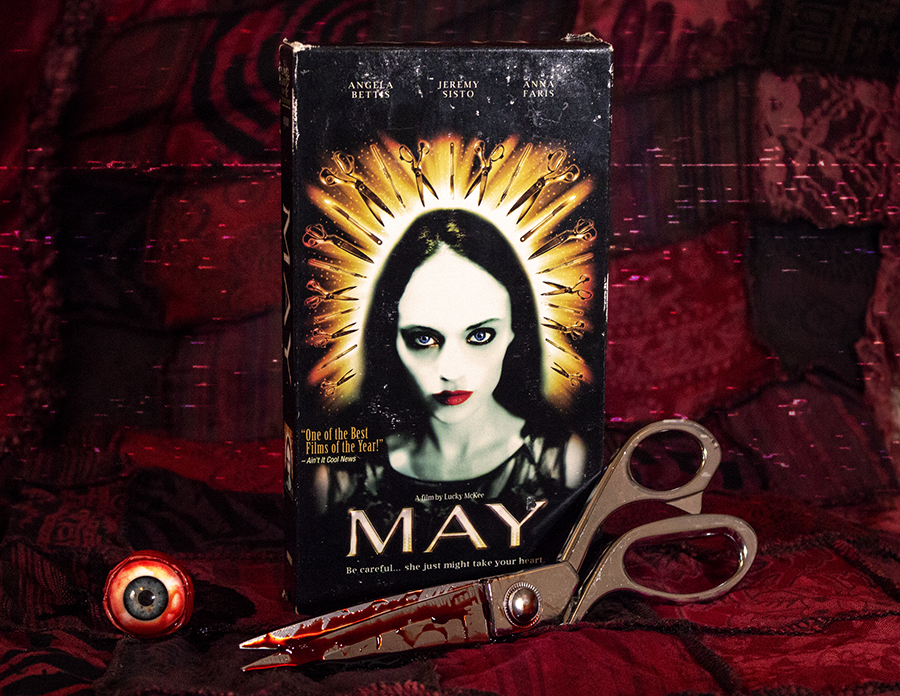 May: VHS of the Month Review 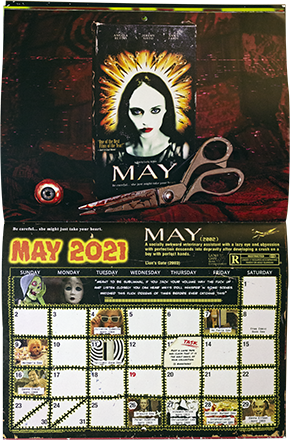 Since Lunchmeat’s video release of Rent-a-Pal, I’ve been on a psychological thriller and horror bender. I think we all watch movies like that unfold with morbid curiosity as the protagonists dig themselves a mental grave and fall into violence of their own doing. More so, it just makes for excellent cinema and storytelling. It’s intimate storytelling at that as we are let into the character’s home, life, and mind. Rent-A-Pal did an awesome job of doing that with David and should definitely be checked out. This May, we take a break from all the B-movie creature features and gory goodness in favor of character driven horror with Lucky McKee’s 2002 psych horror, May. Clearly, this movie was meant for this month.

May isn’t exactly a retro movie either. It had a theatrical release in 2002 and a major video release the next year. This was the Bronze Age of Blockbuster. Digital libraries and video-on-demand were in their infant stages while the video store continued strongly into the new millennium. Because May didn’t perform too well at the box office, most people picked this flick up in the horror section. Like many of the movies Home Video Horrors has been curating this year, May received a cult following from its video store release. 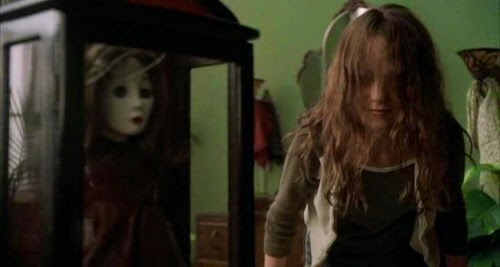 This is a story about the concept of perfection. McKee takes us into the life of May Canady (Angela Bettis). She’s a regular Carrie White in terms of upbringing and social capability. Instead of supernatural powers setting her apart from the rest, it’s her lazy eye. It wouldn’t have been a big deal, if her mother wasn’t obsessed with perfection. Having to wear an eye patch all the time not only warranted the typical pirate jokes but cost her a social life and made her an outcast. Her only friend is a doll her mom got her named Susie, but it can never leave its glass display case. In adulthood, May works as a veterinary assistant at a practice run by the large man from Borat. I give mad props to her for acing her job interview with her people skills.

The focus is on how May interacts with her co-worker Polly (Anna Faris), her crush Adam (Jeremy Sisto), and even Susie, chillingly enough. Rotty is correct, if you listen enough or have the volume high enough you can hear Susie whisper. When May first unwraps her as a child, you can faintly hear her say hi, almost. The whispers are present all throughout the movie. But how does this all tie together? The answer is perfection. May inherited her mother’s obsession with everything being perfect and she wants the perfect friend. Adam has what she sees as flawless hands and Polly’s neck is something she writes home about. It’s a shame that Adam and Polly have their human imperfections. But May remembers what her mom told her, “If you can’t find your own friends, make them.”

What follows is May’s bloody quest to literally make the perfect friend from everything she finds perfect, shedding away any flaws that may break her heart. It’s a dark, tragic story since all she wants someone to hold onto. Afterall, she can’t hold Susie. The doll is a collector’s item living the rest of its days in a glass case. During her mission, she meets an unnamed punk (Jams Duval) and Polly’s girlfriend Ambrosia (Nichole Hiltz) who she must admit have some pretty sweet limbs, if you know what I’m saying. The intimate storytelling this psychological horror offers is in May’s home, life, and mind. It’s one of a lost soul searching for friendship in the only way she’s familiar with. It’s even more tragically poetic when you know that human perfection is as real as a unicorn’s horn. 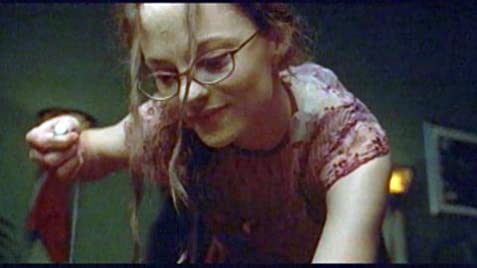 May was Lucky McKee's directorial debut. He states that the character of May was largely inspired by the shy Lydia Sinclair from Terry Gilliam’s The Fisher King (1991). Perhaps May was meant to be a darker take on the shy girl archetype. We see shy people every day keeping to themselves. Who knows what’s going on in their heads? McKee also makes a cameo in the movie as the man in the elevator with his girlfriend. While he’s directed other horror projects like All Cheerleaders Die (2013), May continues to be the film he’s most known for. We’ve all seen shy and awkward girl stories, but since Carrie it’s become clear we have an appetite for how dark they can get.

Hell, Angela Bettis was even Carrie that same year for the made for TV movie. While the influence isn’t direct, it’s undeniable. But what makes the character of May different from Carrie is that May is trying to live in her own fantasy at the expense of the lives around her. Carrie so tries to be part of real life and reality, but it’s at her own expense. Watching the two movies in tandem gives you a feel of how Bettis plays both. For whatever the reason, there’s something about seeing Bettis in a static emotionless stare.

May did receive a limited theatrical release in which it bombed by all means. $150,277 was only how much it grossed domestically. The rest leading up to its total of $634,803 was worldwide. In its defense, it was shown in no more than 10 theaters. Compared to its budget of $1.7 million, there were no profits to be made. However, critics were pleased with the film nonetheless. Like I said, there’s something about watching psychological thrillers with morbid curiosity for the characters and seeing how far from reality they can stray. With May, her fantasies of perfection keep us intrigued and curious. Plus, half way through the movie takes on a slasher tone that any horror junkie would enjoy. It doesn’t feel like stock characters are killed off either; each death served a purpose. That, coupled with the intimate character storytelling makes for an underrated combo. 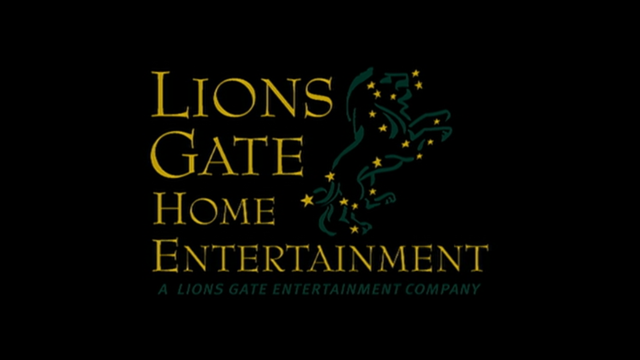 The home release which gave May its cult following was the 2003 Lionsgate Home Entertainment version. The one I was able to get still has its Blockbuster stickers on it. This one has got to be the most content filled tape I’ve reviewed yet. This baby comes packed with previews of coming soon features and ones about to be released on home media. This is definitely a tape from the Y2K era. Lionsgate includes a promo for their new website, as was the newest thing to do, and DVDs are now being advertised in addition to their VHS counterparts. Previews included Cabin Fever, The Hard Word, Sweet Sixteen, Godsend, House of 1,000 Corpses, Intacto, Nemesis Game, and even the theatrical trailer for American Psycho. Maybe you’ve noticed only a couple of familiar flicks.

A little history lesson here. Lionsgate, as we know it, was founded in 1997 by Frank Giustra in British Columbia. As you could tell by the previews I mentioned, Lionsgate spent its earliest days working with oversea and independent filmmakers. That’s why most of the previews on the VHS tape are for Australian and European productions. Around the time May was released, Lionsgate was starting to acquire their own major subsidiaries and film studios. Being a reliable film distributor really helped to establish itself in Hollywood as one of the most recognizable names. It’s truly fascinating to learn where they’ve come from watching this tape. We’ve seen home entertainment companies come and go with our movies of the month. Lionsgate went from distributing cult films to the owners of Summit Entertainment and Starz. Not only are they still around, they’re going strong.

I personally can’t help but think if May was released today, more people would’ve seen it. We’ve seen a mainstream spike in psychological thrillers with big movies like Joker and Cruella. It would seem that morbid curiosity of watching someone descend into a reality of their own making and the real world consequences is present in all age groups. Needless to say, I was glued to the statically charged screen of my Omnivision the entire movie.

And the ending…my god, the ending. If your skin isn’t crawling then it just flat out leaves the room.