Thirty years after her accidental death at her 1957 senior prom, the tortured spirit of prom queen Mary Lou Maloney returns to seek revenge. 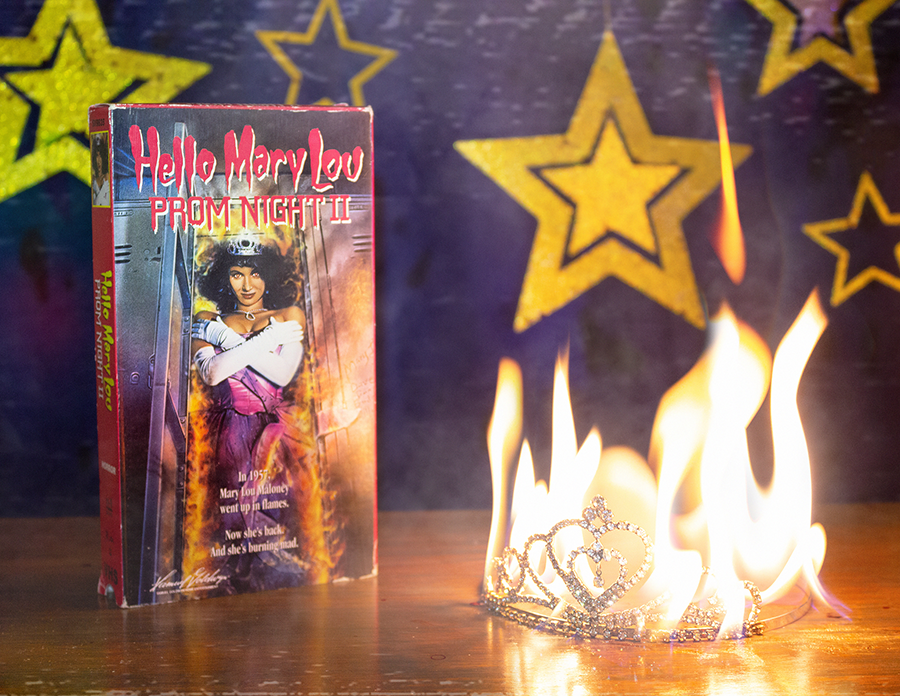 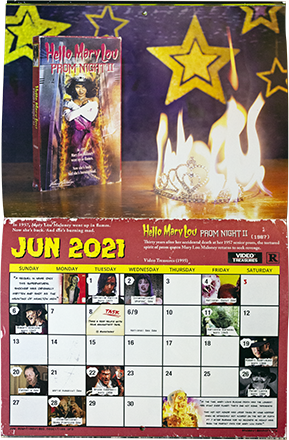 Summer is upon us. I got my first sunburn of the season. Now, I’m packing an extra tube of Banana Boat from here on out to make sure no more follow. But we’re not heading off to camp…just yet. This June we go back to school with 1987’s Prom Night II Hello Mary Lou. This month also sees our return to the heyday of VHS and video stores with new slashers coming out every year. Mary Lou Maloney may have been one of those ghostly killers that flew under the radar at the time but is now one of the most remembered monsters in cult films. After her appearance in the last act, monster is not an overstatement at all.

Canadian director Bruce Pittman created a slasher ghost story that would not have been possible without contemporary horror of the 70s and 80s. In fact, the whole movie, from the plot to the references, draw narrative and aesthetic from A Nightmare on Elm Street, Carrie, and The Exorcist. You can make a drinking game out of how many times The Exorcist is mentioned, actually. They also pull a Night of the Creeps and reference famous horror icons like Stephen King, Ed Woods, John Carpenter, and Frank Henenlotter as characters’ last names. That’s always a sign of a creative team that knows their stuff. But how much inspiration does Prom Night II take from its 1980 prequel with Jamie Lee Curtis? Just the universe and the school.

What we have here is another case of movie distributor-assigned identity crisis like with Troll 2. Pittman originally filmed under the project name of The Haunting of Hamilton High. After seven years, people would still remember the original Prom Night so Alliance Films in Canada made the decision for a quick title change to cash in on the IP. 1980’s Prom Night wasn’t an American film either. It was filmed in Toronto and distributed through AVCO where it saw record-breaking weekends. Prom Night II was filmed in Alberta and distributed through The Samuel Goldwyn Company. For what is considered an American slasher classic, the Prom Night series is actually a Northern product.

Mary Lou Maloney (Lisa Schrage) of the class of ’57 at Hamilton High is a heartbreaker. She’s the kind of girl that rock bands write songs warning you about. She’s made her whole class her harem, and she’s loving every minute of it. But it was only a matter of time before she broke the heart of the wrong guy. In that case, it’s her senior prom date, Billy Nordham. You can’t help but sympathize with him. He had no way of knowing that the stink bomb those pranksters discarded was made of highly flammable material. Consumed by her lust for revenge and literally the flames, Mary Lou would go insane as a spirit trapped in purgatory. Her classmates graduate with her final moments as prom queen burned (pun intended) into their souls.

Flash forward 30 years later to Vicki Carpenter (Wendy Lyon). She’s as innocent as Carrie White but has a handle on the social world. The only true trait she shares with her is an intensely religious mother (Judy Mahbey). At least her father (Wendell Smith) means well. Because of her mom, she has to find her own dress for her upcoming senior prom. Unfortunately, the only one she was able to find was Mary Lou’s in the school’s storage. Almost instantly, her friend Jess (Beth Gondek) turns up dead –hanging by the dead prom queen’s dress. And Vicki soon finds out that she isn’t just being haunted, but hunted as Mary Lou’s new earthly host. At the same time, Billy (Michael Ironside) is now Hamilton High’s principal and Buddy Cooper (Richard Monette) is a member of the local clergy. Always got to love Ironside bringing the heroic energy. Buddy was Mary Lou’s second date to the prom. Both of them feel the return of their former classmate and spring into action to save Vicki and her friends. 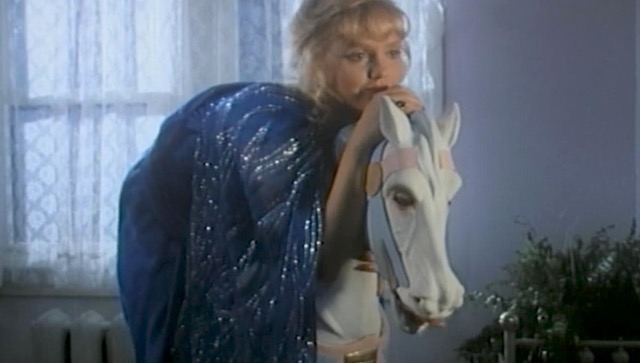 With the tone, scares, kills, and references, Prom Night II is in fact a homage to horror scenes of the 70s and 80s. It seemed all of Hollywood was trying to create the next big Freddy or Jason. From the big-name studios to small independent film companies. Bruce Pittman and Simcom Limited up in Canada created a blend of not just A Nightmare on Elm Street, Carrie, and The Exorcist but especially Evil Dead and Poltergeist. For the first half, Mary Lou functions as an unseen otherworldly killer. They start out small with things moving around to comprising and dangerous positions, to the flat-out bizarre as a rocking horse coming to a demented life or a water-filled chalkboard as deep as a lake. We have Nightmare on Elm Street’s Jim Doyle designing the special effects so that Vicki isn’t safe at school or at home. Lisa Schrage doesn’t appear as Mary Lou, would you know. Loretta Bailey provides performance for her true undead form at the end. Wendy Lyon, akin to Liane Curtis, has to play two roles as a possessed victim. That’s what makes Mary Lou so cool, she’s such a versatile presence.

While it’s no gore fest, some of what happens will make you gasp. The water chalkboard, Mary Lou emerging from Vicki like a chest-burster, and that damn rocking horse. Scenes such as these make me wonder why the name had to be changed to include it in the Prom Night series. The Haunting of Hamilton High may have been a story that could hold its own. On the other hand, it’s a good direction for a series like Prom Night –having it as an anthology series rather than continuing sequels, like how Halloween III Season of the Witch was supposed to start a new era of storytelling set on Halloween nights perhaps in the same universe. Regardless of the distributor’s motives, the movie was rebranded after reshoots with producer Peter Simpson. In an interview, he would admit he felt that taking this approach hurt its release because it would be misunderstood like Halloween III. 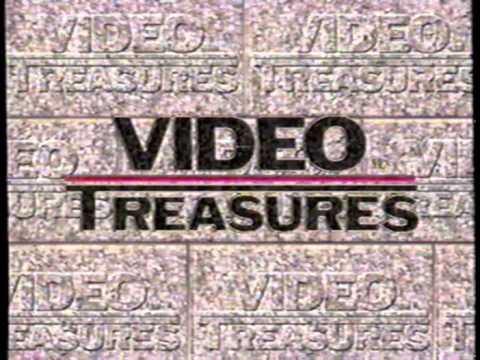 The departure from the realistic killer out for revenge to a ghost slasher with an arsenal of supernatural powers proved to have an audience as Prom Night II Hello Mary Lou was released in theaters in 1987 to a box office performance of $2.7 million. Say what you will, it is a profit of the $2.5 million in Canadian dollars used to produce the film. Of course, people will most often remember it for its home video release. The version most tape heads would be familiar with is the 1988 Virgin Vision release. Home Video Horrors selected the 1995 release courtesy of the video titan, Video Treasures.

Formed in 1985, Video Treasures built their library with previously released films. These bad boys started with nothing but public domain films before making licensing deals. I own a couple of their past releases including Godzilla Raids Again. In 1995, Video Treasures and another video distributor, Starmaker Entertainment (they also released a couple of Godzilla movies) would merge into what we would come to know as Anchor Bay Entertainment until their defunction in 2017. That would mean that Prom Night II is one of the last releases of Video Treasures before the merger.

Prom Night II would not be the last appearance of Mary Lou Maloney. In 1990, Canada would once again produce the next entry in the series, Prom Night III The Last Kiss with Courtney Taylor taking wholly over the role. This one is more of a comedy and satire of the previous one with Mary Lou messing around as opposed to out for revenge. Regardless of what she’s doing, Mary Lou was a change in direction for the Prom Night series. What made the first one so scary was that it, for lack of a better description, could happen. Sort of like the urban legend of the hook hanging on the car door, it’s a chilling realistic tale of a dangerous intruder. The 2008 American remake really nails this. However, if you’re looking for those 70s and 80s style spooktaculars like Freddy Krueger or the Evil Dead, look no further than Mary Lou.