A couple who participated in a potent medical experiment gain telepathic ability and then have a child who is pyrokinetic. 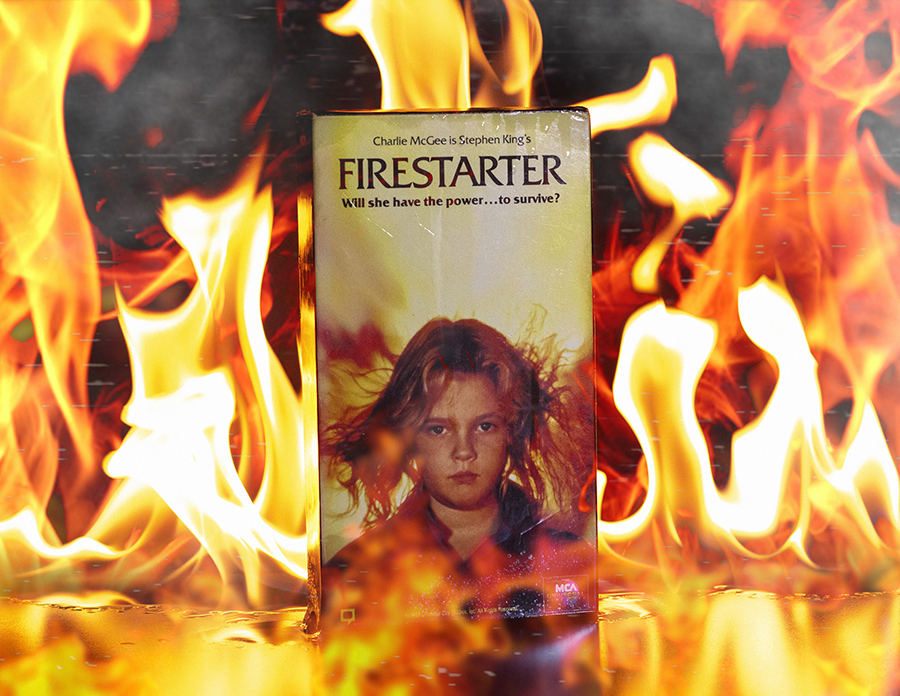 Firestarter: VHS of the Month Review 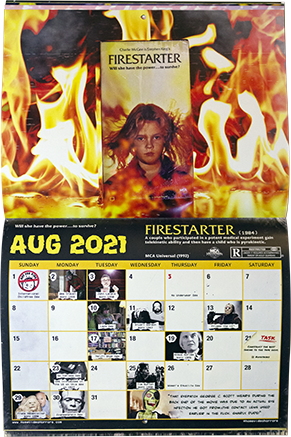 Without the masks and capes, a superpower narrative can usually take a dark turn. That’s just the reality of them. If you were to gain powers like telekinesis or psychokinesis overnight, you wouldn’t just dress up and put them to good use just like that. You would freak the hell out. There’s the fact that you can do the abnormal and the terrifying realization that you can now hurt people on a massive scale. That’s why comic writers also write great horror stories no matter the medium. In fact, Stephen King and his son, Joe Hill, have shared stories of this nature for years -Stephen starting his career with Carrie and Joe with his imprint of horror comics at DC. This month would be a great time to dive into Hill House comics out on the porch while we got sun, and kick back with the 1984 sci-fi flick based on one of his father’s earliest books -Firestarter.

By then, King had shown the contemporary literary world how scary a girl with mind telekinesis can be. Firestarter is a story about captivity, trust, deception, and how scary a girl with pyrokinesis can be. The story focuses on 9-year-old Charlie McGee and her dad, Andy. When he was in college, he and his girlfriend Vicky participated in a medical experiment by a secret government agency that killed all the other participants. Vicky develops the ability to read minds and Andy develops the ability to brainwash people into doing his bidding. Yes, exactly like the Jedi mind trick, though he calls it “pushing.” When they have Charlie, she gets the ability to cause spontaneous combustions at will. Many characters in the story state that she can do something as little as lighting a match stick with her mind to bombing a city. That’s some serious comic book hero-esque stuff.

However, the secret government agency known as The Shop still has their eyes on their prized specimens and Charlie’s power is of great interest to them. They kill Vicky and attempt to take Charlie until Andy intervenes and they go on the run with the goal to expose The Shop to the news. They manage to evade The Shop until John Rainbird, a badass Native American Vietnam War vet, is sent to capture them by The Shop. He’s their hitman and assassin guy. The book then continues to detail Andy’s and Charlie’s stay at The Shop’s testing facility as Andy is kept contained and Charlie continues to demonstrate stronger usages of her power. At the same time, Rainbird poses as an orderly or janitor to gain Charlie’s trust. Of course, he’s lying to her. There’s a deep character arch with him on his obsession with Charlie’s powers and wanting to kill her but not before getting to know her. In the end, liars are revealed and powers are unleashed let’s just say.

When your books are selling over a million copies every year, you can bet studios are going to line up to try to adapt into the next big thing that will have moviegoers talking about it for a while. Or, perhaps, even go to the library for once. The adaption of Carrie, which I’ve referenced more times than I can count this year, solidified King’s place in cinema. Would you believe that Firestarter could have been a John Carpenter movie? Yeah, he was offered a chance to direct while he was working on The Thing by Universal. There was even talk of Richard Dreyfuss in a starring role. But The Thing’s performance at the box office was off-putting for the producers so, they went with Class of 1984’s Mark L. Lester. Stanley Mann was brought on as the new writer and concocted a script that was pretty much the book verbatim. Carpenter had a more original take with the original elements of the story rather than a moving picture retelling. That makes you think what John Carpenter’s Firestarter would have been.

Lester and the Dino de Laurentiis Company got straight to work filming in North Carolina in the fall of 1983. The casting was a combination of golden age and modern acting talent with David Keith as Andy, Drew Barrymore fresh off her role as E.T.’s Gertie as Charlie, and George C. Scott as Rainbird. Other casts include Martin Sheen as Captain James Hollister of The Shop where Andy and Charlie are held, Moses Gunn as Dr. Pynchot, Freddie Jones as Dr. Wanless, and Art Carney and Louise Fletcher as the Manders -a farm couple that Charlie and Andy befriend while they’re on the run. George C. Scott had been acting since the late ‘50s and Art Carney the late ‘30s at the time. John Rainbird actually fits Scott’s acting repertoire as he’s often in that kind of character role. I truly think that Rainbird had the chance to be another Anton Chigurh in terms of depth. The internal monologues King wrote for him in the book must go on for pages and pages in the book. 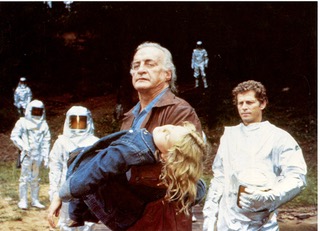 But I know what you want to talk about. You want to talk about Charlie, the Firestarter herself. Charlie McGee is by no means a villain or antagonist. She’s an afraid little girl with great power. Fortunately, her parents were there to teach her responsibility. But The Shop just wants to use it as a weapon. There are a little few of Spider-Man and Hulk references for an equally super-powered individual. The Firestarter isn’t meant to be taken lightly. The scientists estimated that by the time she becomes an adult, she’ll be able to think up explosions on par with nuclear bombs. But she can’t let it come to that. She needs to let the world know what she and her family have been through with The Shop so they can’t do it to anyone else. She has a good heart and desires friendship as she interacts with Rainbird under the janitor disguise. I don’t know, I like to think that future Charlie dons a suit with a big flame on the chest and a domino mask. That’s a nice head cannon -that it all was a superhero origin story.

Another aspect of this movie that I have to sensationalize is the soundtrack done by the German electronic band, Tangerine Dream. From the moment the old Universal opening logo comes on screen, that sweet electronic synthesizer sets a tone unique to movies from the ‘80s and the decade before. It was definitely the natural track for sci-fi during the Reagan era. Even the first rendition of the Terminator theme is an electronically synthesized track. Tangerine Dream is still active to this day with hundreds of albums each exploring a new area of the electronic genre and experimenting with their own sound. They even helped create the Grand Theft Auto V soundtrack. 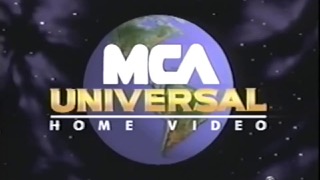 Firestarter performed $17.1 to $18.9 million at the box office in 1984 to a budget of $12 million. The fact that they almost had John Carpenter on the project shows the kind of vision Universal had for King’s story. Perhaps they wanted it to be a story about a man trying to control a power greater than him only to have it destroy him in the end due to mistreating it. Or, maybe a tale of two different father figures with Andy and Rainbird. The story of Firestarter is so basic that it can be taken in so many contexts. But after The Thing didn’t post big numbers despite being a great movie, Universal decided to play it safe by quite literally going by the book. Reviews would be extremely mixed with Roger Ebert panning it and Stephen King disliking how it turned out on account of the producing. However, many remember it as one of Barrymore’s first projects and a faithful adaption to the book.

MCA Universal gave Firestarter its home release in 1992. I think we’re all familiar with Universal. It’s not too often when Home Video Horrors sees a curated tape from such a huge movie company. The largest one we’ve explored this year was Lionsgate but even then, it was in its infancy when we discussed it. However, we can talk about MCA or the Music Corporation of America as it was once known. MCA has origins back to 1920s Chicago speakeasies as they managed their musical talent. Soon, they entered the movie industry and would takeover Universal Studios and Decca Records in 1962. After a series of owner changes and different conglomerates like Seagram acquiring it, MCA would become what we know today as Universal Studios Inc.

Firestarter isn’t the last we’ll hear from Charlie McGee. The character would be played by Marguerite Moreau in the 2002 miniseries Firestarter: Rekindled and Ryan Kiera Armstrong will play her in the upcoming remake by Blumhouse and Universal. That is truly something I would like to see. A lot of the faith for Firestarter came from its special effects. While all the tricks and explosions were great, I couldn’t help but feel we could have more shots of Charlie standing amongst the flames as if she was one of them or extreme CG fights between her and army vehicles. Something tells me we’ll be seeing more creative freedom with the newer Firestarter.